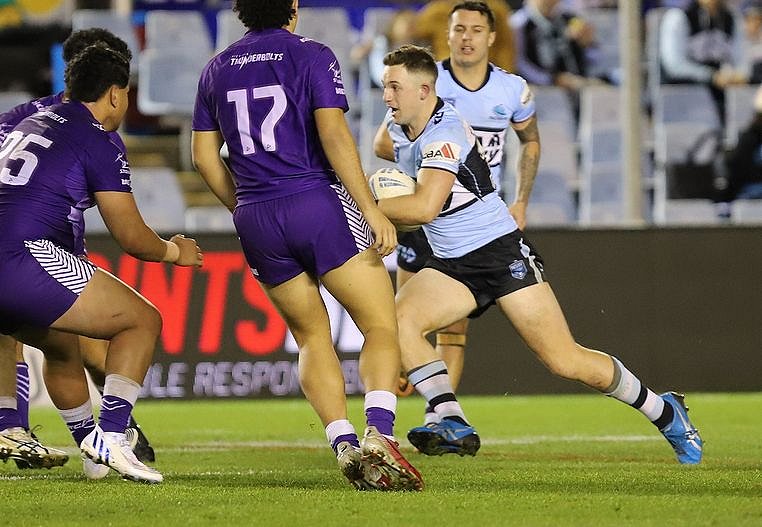 In their most impressive attacking performance of the 2022 season, the Jersey Flegg Sharks have scored nine tries in a 50-16 victory over the Victorian Thunderbolts.

The Sharks were dominant in a first half which saw them lead 28-6, before going on with the job in the second period to continue their push for a Finals berth.

With the battle won in the middle of the field it was the men on the outside to take advantage, with eight of the nine tries scored by the Sharks backs, fullback Kane Ball and winger Tom Rodwell notching doubles.

Coach George Ndaira was understandably satisfied with his team’s performance.

“It was really good to see the boys start the game on a good note and get off to a good lead, that set the game up for us,” Ndaira said.

“We were a bit more controlled. There is nothing wrong with our attack, we can score points, at times we’ve got to understand when to play footy and when to get through out sets and put them under pressure. But the boys are coming along.”

“It was good to put back to back wins together,” Ndaira added.

Ironically it was prop Toby Boothroyd to register the Sharks first points just five minutes into the contest, however soon after it was Ball touching down as the home team led 12-0 inside the opening 10 minutes of the match.

Victoria would respond with their first try of the match, but from that point it was all the Sharks in the opening half, three more tries before the break, the last of those to half back Ryan Rivett who also kicked seven goals from nine attempts on the night, giving the Cronulla side a commanding lead.

The Thunderbolts would post the opening try of the second half, but the remainder of the contest was largely one-way traffic, the final try of the match to Ball, who scooped up the football two metres out from his goal line before running the length if the field, in one of the highlights of the night.

The win and two competition points sees the Sharks consolidate fourth position on the ladder and mount some pressure on the teams ahead of them.

The young Cronulla team are now just one point behind the second placed Dragons and third-placed Knights, with a match next Saturday afternoon against the Eels.