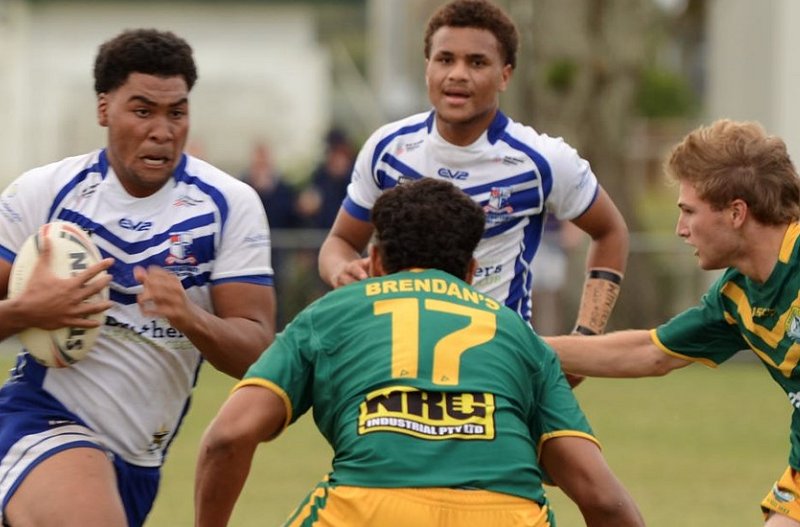 St Patrick’s College, Mackay rode the emotions of decades of Confraternity Carnival memories as they surged into a prized boys’ final tomorrow against the power of Townsville’s Ignatius Park College.

In front of a huge home crowd, including old boys who gathered for a “Confro” reunion, St Patrick’s rolled The Cathedral College, Rockhampton 16-6 in their semi-final at BB Print Stadium to move within one win of their first Confraternity Shield since 2003.

They will have to topple defending champions Ignatius Park College, who won a battle of attrition with St Brendan’s College, Yeppoon, 12-6 in a gripping semi-final.

A host of Queensland’s greatest players have emerged from the event.

St Patrick’s coach Michael Comerford said his players were buoyed by the home support, which reached its loudest level when backrower Liam Doherty stomped through The Cathedral College defence for a decisive try with 15 minutes remaining.

“It’s huge to be able to play before this crowd and it’s very special for the players,” Comerford said.

“It’s been 26 years since Mackay last hosted Confro and the whole city has got behind it.

Some of these players will go on to very high levels of footy but, for some others, this will be the most important games they will play, so it’s something to cherish.”

The Mackay crowd took a breath after The Cathedral College prop Ashton Saunders barged over for a 6-0 lead.

But St Patrick’s regained their spark to notch two tries from kicks, either side of halftime, before Doherty’s individual effort put away the gallant Rockhampton team.

On Field 2, the famed rivalry between St Brendan’s and Ignatius Park promised a tight match, but the Townsville team barrelled down field for a try after two minutes to prop Jamaine Stanley.

“I thought that early try really seemed to get Brendan’s focused because they really aimed up after that,” Ignatius Park coach Steve Lansley said.

“They’re a really tough team and the game became a grind with both teams trying to break through. I was really proud of the way our boys defended.”

That set up a thrilling finishy, but Ignatius Park edged away when their enterprising style of football led to a cross-field kick and a try in the left corner to Rayzarlin Pearson with five minutes remaining.

St Brendan’s had a full attacking set on the Ignatius Park line inside the last two minutes, but a knock-on spoiled their hopes.

Tomorrow’s finals day will feature six deciders for trophies while the rest of the 48 teams will play off for final finishing spots.

The highest trophy in the Division 2 rankings is the Neil Bloxsidge Plate which will pit St Edmund’s College, Ipswich against Dalby’s Our Lady of the Southern Cross College.

The Division 3 trophy final will be fought out between Mt Maria College from Mitchelton and Hervey Bay’s Xavier Catholic College for the Confraternity Cup.

After tomorrow’s final at midday, the QISSRL Merit team will be named from the best players across all divisions over the four days of competition play.

The draw can be seen at www.confraternitycarnival.com.au.

All matches will be livestreamed on www.confraternitycarnival.com.au.