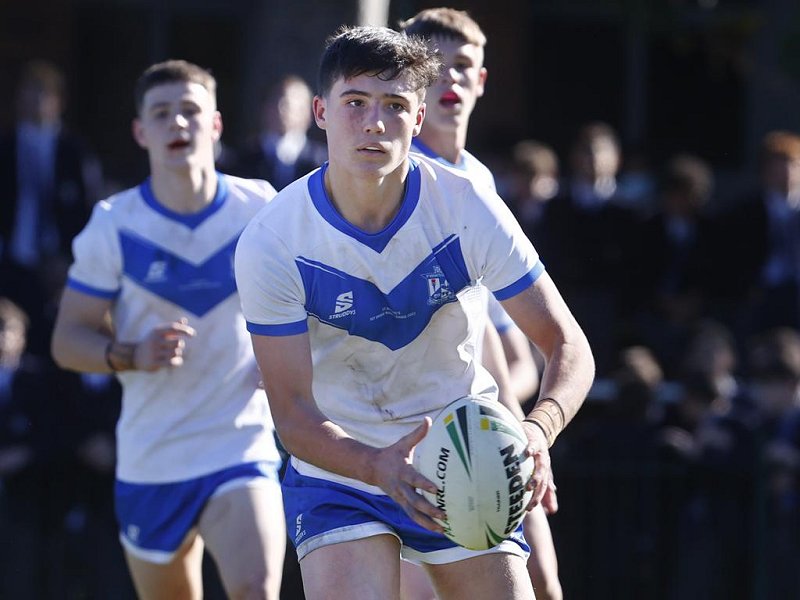 A piece of magic from Bayden Moran and a timely late try from Liam Ison lifted St Dominic’s to an important NRL Schoolboys win over Hunter Sports High. RELIVE the action from our LIVE STREAM.

St Dominic’s survived a scare from Hunter Sports High to record their second win of the NRL Schoolboy Cup with a 38-20 victory at Kingswood.

Hundreds of St Dominic’s students created a rowdy atmosphere, which helped spur the home side to victory.

“It was amazing, it’s probably the last game here for most of our year 12 boys, so it was great to get it done in front of the home crowd,” St Dominic’s captain Liam Ison said.

It was a nightmare start for the visitors as they booted the ball dead from the opening kick off.

Just when it looked like the visitors would cross over again, winger Cooper Hale danced through Hunter’s line running 80m to score a kick return try.

Moran produced one of the magical moments in the Schoolboy Cup, running over his defender and throwing a miraculous flick pass, reminiscent of Cowboys star Murray Taulagi earlier this season, to set up Mitchell Heather in the corner.

The visitors needed to score the first try in the second half and they did when Connor Votano intercepted the ball and ran the length of the field.

Then, Votano took advantage of the rushing St Dominic’s line and silenced the crowd by scoring his second in the corner.

When it seemed like the momentum had shifted Hunter’s way, Panthers SG Ball young gun Ison slipped his way through several defenders and scored a much needed try.

“Hunter had a strong win against Greg’s, so we knew they’d come rolling through in the second half,” Ison said.

“Churchy (St Dominic’s coach Kyle Churchill) said to throw the ball around because they were a bit tight, so we did that and executed it well.”

Prop Connor Autagavaia gave his home side a 60m carry from the next kick off which set up winger Mitchell Heather perfectly for his second.

Just like his older brother Nathan does every weekend, Jett Cleary set up his fellow half Jaxen Edgar with the perfect no-look inside ball which sealed the deal for St Dominic’s.

Both sides fought hard, but in the end it was Moran and Ison who steered their team home.

St Dominic’s will face rivals St Gregory’s next week, which is set to be a blockbuster.

“It’s always hard against Greg’s, they’ll be looking to bounce back and hopefully it will be tough and a good game,” Ison said.

Hunter Sports High had barely been a focus for St Dominic’s coach Kyle Churchill, before the Peter Mulholland Cup kicked off.

St Dom’s second round clash with the Lake Macquarie-based school had always been in the back of Churchill’s mind, but it had taken a back seat to his side’s season opener against Bass High and evergreen rivals St Greg’s.

Now Wednesday’s fixture shapes as a season-defining moment for the players from both schools. 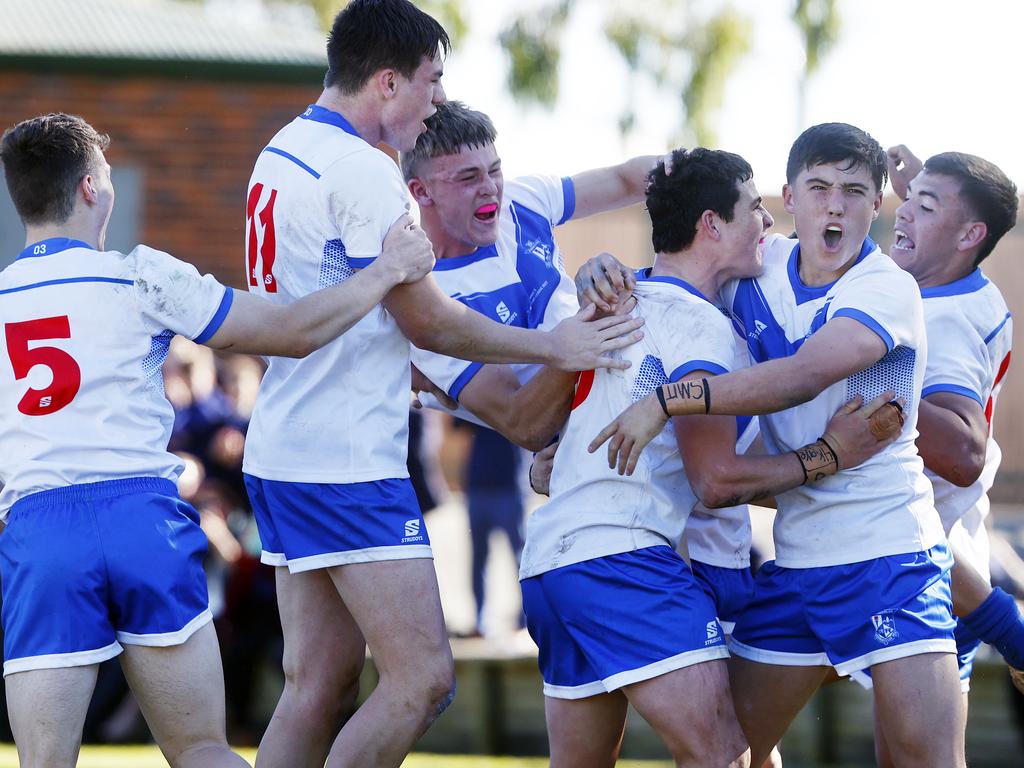 Hunter Sports’ upset win over perennial heavyweights St Greg’s in the opening round means a win for either side will all-but guarantee a spot in the Peter Mulholland Cup finals.

There is a quiet confidence and zero noise in the St Dom’s camp.

“If you look outside that top four teams, (Hunter’s win) was the best victory across all the pools, looking from the outside in,” Churchill said. “A lot of people didn’t expect that, because Greg’s has a good side.

“(Hunter) have come off a really good win in the opening round and that is something that we are very aware of. I think at the start of the year we were focused on Bass and thinking of Greg’s after that, but Hunter have changed that. Hunter Sports High half Lauchlyn Spicer has emerged as a leader of the group this season. Picture: Jonathan Ng

“We have a pretty clever group, they are keeping their eye on things like (other team’s results). We won’t lose through lack of preparation or lack of understanding the magnitude of the situation.”

Both sides have the talent to withstand the pressure of the crunch clash.

St Dominic’s are blessed with experienced players like fullback Liam Ison and hooker Riley Pollard, who have both spent considerable time in the Panthers’ impressive junior system.

The pair played a key role in the win over Bass Hill and will be tasked with keeping their side grounded in this week’s crunch clash.

Hunter is not without its own junior representative star power, with Newcastle Andrew Johns Cup props Kade Youlten and Beau Slade fuelling a powerful engine room.

The tough-as-nails duo were key to Hunter’s win over St Greg’s in the opening round and will be determined to exert their authority on a smaller, more mobile, St Dominic’s pack.

WATCH NRL SCHOOLBOYS CUP LIVE
The Daily Telegraph will exclusively live stream every match of the Peter Mulholland Cup this season which involves the best rugby league nurseries across NSW.

Find out more information about the competition here and see below for the opening round draw.