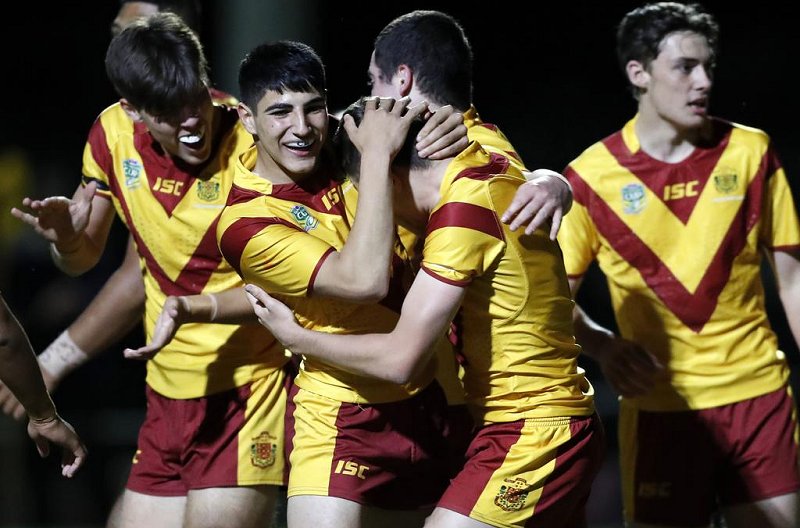 Holy Cross College will face a tough test to start the Peter Mulholland Cup with three key players sidelined for their opener against All Saints Maitland. Picture: Jonathan Ng

Down on troops due to injury, Holy Cross College had to fight back from a deficit before taming All Saints, Maitland. RELIVE the action from our LIVE STREAM.
Replay: Schoolboy Cup – Holy Cross College vs All Saints Maitland
Holy Cross College has survived an almighty scare to beat All Saints in the opening round of the Peter Mulholland Schoolboy Cup.
In front of a home crowd, the boys from Ryde had their peers feeling nervous after they were down by eight points in the first half of the game.
But in the 29th minute – a sensational 40m solo try by fullback Cameron Kanaan was the turning point that helped drive Holy Cross to an entertaining 38-24 Mulholland Cup win over All Saints.
Flying winger Rory Davidson was also instrumental in the recovery of the gold and maroon, scoring two second half tries, while five-eighth Mickael Nasser also crossed over for a four-pointer that will be hard to beat as the try of the round.
While Holy Cross dominated the contest in the second half, scoring four more tries to win the game at the Ryde home ground, there was plenty to like about the young and valiant All Saints side.
Newcastle Knights rampaging backrower and co-captain Myles Martin fought until the very end, proving to be a threat in attack and defence for the full 60 minutes of the game.
Round 2 of the competition will see Holy Cross College meet with Patrician Brothers Fairfield and All Saints will clash with Farrer MAHS.

– Matthew Elkerton
Holy Cross College coach Tim White has thrown the coaching manual out ahead of their Peter Mulholland Cup opener against All Saints Maitland.
The clash between the two proud catholic behemoths was live streamed exclusively on The Daily Telegraph website.
White, who is also the current Australian Schoolboys coach, said his side had been decimated by injury on the eve of the season forcing a change in focus.
Captain Keenan Lawandos, dummy-half Cooper Wheelhouse and front-rower Jai Robinson will all be missing in action over the opening rounds of the competition.
Holy Cross College will face a tough test to start the Peter Mulholland Cup with three key players sidelined for their opener against All Saints Maitland. Picture: Jonathan Ng
“It is very unlucky for us, it is not the time of year that you want to lose players,” White said.
“We are running a bit short in terms of squad depth. I haven’t spoken to the boys about stepping up to the challenge, but I really hope they do. Holy Cross College and All Saints Maitland have a strong rivalry that will be ignited in the opening round of the Peter Mulholland Cup. Picture by Peter Lorimer

“In the end that is up to them.”
White said he would likely go away from over-coaching the side and instead give his players free reign to play their own style.
They will face a tough test in All Saints Maitland who have bolstered their squad this season with the addition of Newcastle Knights rampaging backrower Myles Martin.
The blonde haired backrower turned plenty of heads during the SG Ball Cup earlier this year with an impressive four-try haul against South Sydney.
The Bathurst talent has joined All Saints Maitland this season after a successful stint with Patrician Brothers Blacktown last season.
“Myles Martin and Caleb Garvie are our two guys we are relying on to take on a lot of the workload this season,” All Saints coach Elliot Plank said.
“We have got a pretty inexperienced squad in terms of high level footy, but we do have some big star players and a good balance there.”
The clash between Holy Cross College and All Saints Maitland kicks off at 11am, Wednesday.
TEAM LISTS