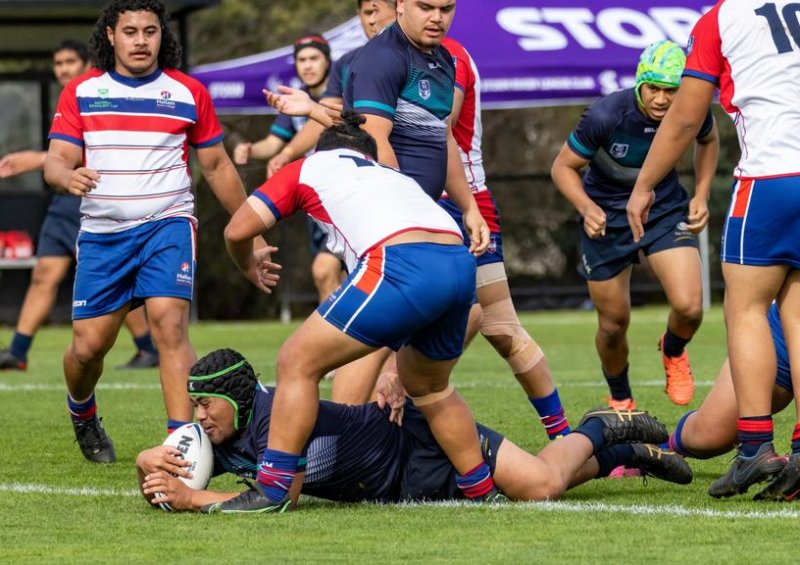 The Grange lock forward Muao Kaisala crashes across to score in the win over Hallam College at Casey Fields. Picture: Penny McCredie

The Grange have punched their ticket to the NRL Schoolboys Cup on their first attempt after a resounding victory over Mount Ridley. Relive all the action from our LIVE STREAM.

Don’t miss out on the headlines from Schoolboy Cup Livestream. Followed categories will be added to My News.

The Grange has booked one of two Victorian spots in this year’s NRL Schoolboys Cup after a dominant win in the qualifying final.

It was a fairytale finish for The Grange, running over Mount Ridley and proving to be Victoria’s top rugby league school in front of a cheering and chanting home crowd on Wednesday.

The Grange were clinical as they dissected Mount Ridley, to take the match 36-14 at The Grange’s new home facilities.

“This is everything we dreamt of and have worked towards, we can’t wait to get in there and rip up,” Fatuleai told News Corp. The Grange are through to NRL Schoolboys Cup

Crossing the line in the second half to cement The Grange’s victory, Fatuleai said he couldn’t help himself “but blow a kiss to the supporters” in celebration of the four-pointer.

“It’s our first game on the field in front of the school and to get the win was amazing. The atmosphere was insane.”

“I love the boys and our school.”

Suliasi Prescott once again starred for the competition newcomers, with the star hooker playing a major hand in the side’s five tries, while fullback Ethan Barlow and Fatuleai also produced outstanding football to send The Grange into their first NRL Schoolboys Cup.

Prescott, who has been named in the Under-18s Australian Schoolboys train-on-squad, punished Mt Ridley’s errors, showing plenty of pace and footwork in attack, streaking away to open the points of the home clash.

Forwards Tana Maiava and Richard Gabriel also crossed the line in the first half, giving The Grange every reason to be excited for the clinic that was about to unfold.

But Mount Ridley refused to give up without a fight and roared to life in the second half, but time proved to be their enemy with The Grange turning away a series of Ridley raids and finishing with a convincing 22-point victory.

Another fierce rugby league nursery, Hallam College, will join The Grange in the NRL Schoolboys Competition.

The Grange College is one step away from creating a schoolboys sporting story for the ages, looking to book their ticket interstate when they battle it out with Mt Ridley on Wednesday.

The competition first-timers have proved to be the year’s underdog, after an upset victory over Hallam College in Round 2 of the Victorian qualifiers put them in the box seat to move through to the NRL Schoolboys Cup competition.

The clash between the two fierce rugby league nurseries will be live streamed by the Herald Sun at 11am, Wednesday at The Grange College as part of an exclusive partnership to showcase the best emerging talents in the sport

The Grange P-12 College’s head coach Shannon Love said this week’s home clash will be an important opportunity to showcase their school’s talent and inspire the next generation of rugby league players. Hallam and The Grange players come together after their NRL Schoolboys Cup Victoria qualifier at Casey Fields. Picture: Penny McCredie

“There’s a huge sense of pride going around the whole school community at the moment, everyone is a part of it, from our teaching staff to our younger years,” Love said.

“It’s the first time we get to host a game on our new facilities so the boys are a little bit nervous, it’ll be a little bit of a spectacle with the school coming out to watch the game.

“But this is what the ultimate vision was from the very start. The reason why we wanted to host at school is to create and environment for the younger age groups to look up to the boys and one day want to be a part of the experience and opportunity as well.” All eyes on Wednesday will be on The Grange’s star hooker Suliasi Prescott, who scored a hat-trick in the first 15 minutes of their 32-18 victory over Hallam College.

“Suliasi has been a good leader for the boys this season. He’s been working on his kicking, waiting for the right opportunities in his attacking game,” Love said.

“Suliasi has been linking up really well with Iziah Havea in the centres and Ethan Barlow who is our fullback.

“Our number 13 Muao Kaisala has also been really strong at lock for us. Suilasi and Muao have played for years and years together so they’ve also got a really good combination there.”

Love said his rookie schoolboys side’s main goal on Wednesday will be “trying to weather the storm” of Mt Ridley’s strong forward pack.

“I think Mt Ridley will come out of the blocks really strong, I think they’ll use their big mobile forwards in the middle,” he said.

“So I think they’ll try to gothrough the middle pretty hard and I think it’ll be tough trying to weather that storm.

The Grange lock forward Muao Kaisala crashes across to score in the win over Hallam College at Casey Fields. Picture: Penny McCredie

“I think they’ll play a really up-tempo game but we just need to try and play at our pace, which is what we did against Hallam.”

Love said qualifying to the NRL Schoolboys Cup is a goal that The Grange was determined to achieve this year and his boys “have put themselves in the best position to achieve that” after an emphatic start to the season.

“Being newcomers, one thing I spoke a lot about with the boys this year is that there is no expectation on us and I think they’ve really maximised on that,” he said.

“Qualifying to interstate was a goal we set at the start of the year as a playing group and it’s something we’ve been striving towards over the last term and a half, trying to get the boys into the next level and give them an opportunity to get picked up interstate.

“We’ve still got a job to do but we’ve put ourselves in a good position to achieve that goal.

“I hope this competition is something the boys will remember forever.”

More in Other Footy