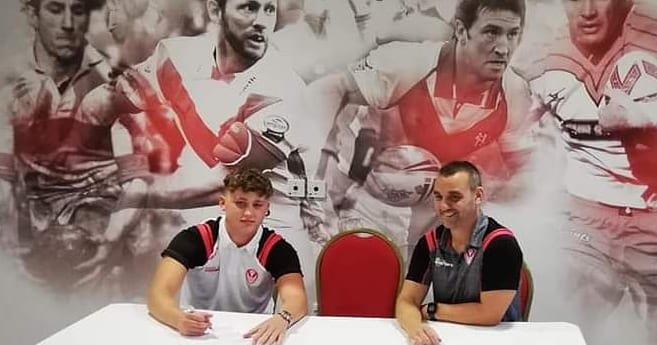 Teenager Eliot Peposhi, whose father Arbian played for Albania against the GB Student Pioneers in Tirana last year, has signed professional forms for St Helens – becoming the first from his nation to earn such a contract.

The 16-year-old, who has penned a two year deal with the option for a third, said: “I’m very honoured and extremely grateful to St Helens for offering me the contract. They are a big club with so many honours and such a massive history.

It is simply brilliant that I am now part of it. Now I need to push and work even harder as my ambitions are to play the game at the highest possible level and perhaps one day I can represent my heritage and be part of history with the Albania Rugby League team.“

His father Arbian added: “This takes him a step closer to achieving his dream to be a professional rugby player. To me, it means a lot for my son to get a professional contract because I know how hard he has worked for the last four years.

But the most pleasing thing is that he is doing something that he really loves – hopefully, his younger brother will follow suit.

“For sure, this is something very good for Albania Rugby League because we need to introduce the sport to our younger generation and, hopefully, this beautiful game can be expanded to all Albanian communities.

I’m a very devoted Albanian and I was very proud when I represented my country playing rugby league. I’m sure my kids will be too when representing their father’s heritage.”

Peter Grayburn, head coach of the Albania national side, believes that Eliot’s success to date could lead to further recruitment from the region.

“On behalf of everyone involved here with Albania Rugby League, we would like to congratulate Eliot on signing a professional academy contract with St Helens.

Having worked with him on the national programme, we know the talent and attitude to apply himself he possesses; not only on the field but also off it.”

“Eliot is one for the future of Albania Rugby League if he so wishes to follow in his father’s footsteps.”

President of Albania Rugby League, Arnaldo Telo commented: “It is a proud feeling because it shows that with the right passion and mindset, everything is achievable for any Albanian that is involved in rugby league here or abroad.

“I am not surprised by Eliot’s achievement knowing his determination and love for the sport. However, this is the first step and the road is a long one. But I have confidence in him and know St Helens will develop him.

I hope this is the first of many achievements for Albanian rugby league players and Eliot becomes an inspiration for a new generation.”

Club side Tirana is scheduled to make history by participating in the Greek domestic league in 2021.