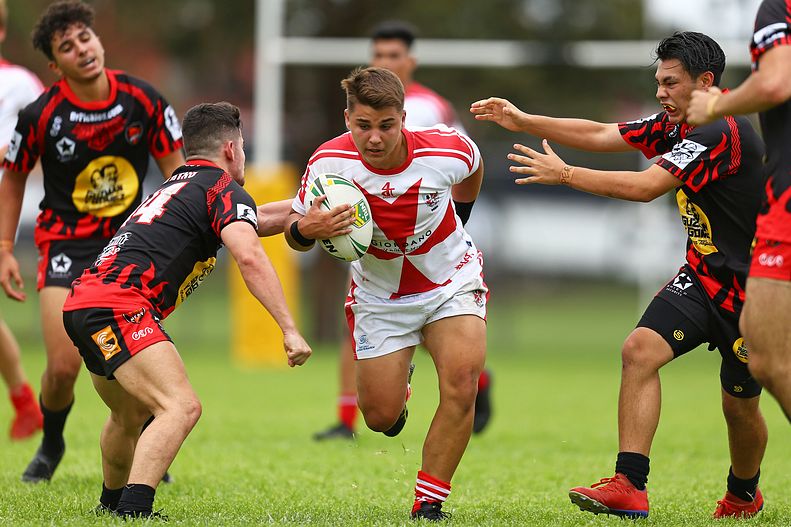 This afternoon proved a successful outing for the Malta Knights junior representative teams, with both the U16s and U19s squads coming away with convincing wins.

The U16s side dominated throughout their match, leading 30 -4 at half time and going on to post a record breaking 70 -4 score line at the end of the 60 minutes.

The U19’s squad also performed well, displaying great resolve to only concede the one try after their Latin American counterparts had them pinned in their own 20 metre zone for the majority of the first half.

Hillier Oval provided overcast conditions for the day, with the rain coming down at the back end of the U16’s match and continuing into the start of the U19’s.

The two teams experienced an interrupted preparation, with only one training session achieved on match eve, due to most grounds being closed in the Sydney basin as a result of recent flooding.

The Maltese performances were clearly not hampered however, as their Rugby League results at all levels continue to impress.

Malta’s next confirmed heritage pathways fixture is on June 20th, when the U18’s go up against Lebanon as part of a triple header involving both women’s and men’s test squads.

On behalf of Malta Rugby League, the coaches would like to congratulate all volunteer staff, parents and players for participating in today’s fixtures.

A big thank you must also go to our valuable corporate partners, Deefort Sports, PRO IT PTY LTD and GIORDANO whom make our participation in these important fixtures all possible with their loyal support throughout the year.