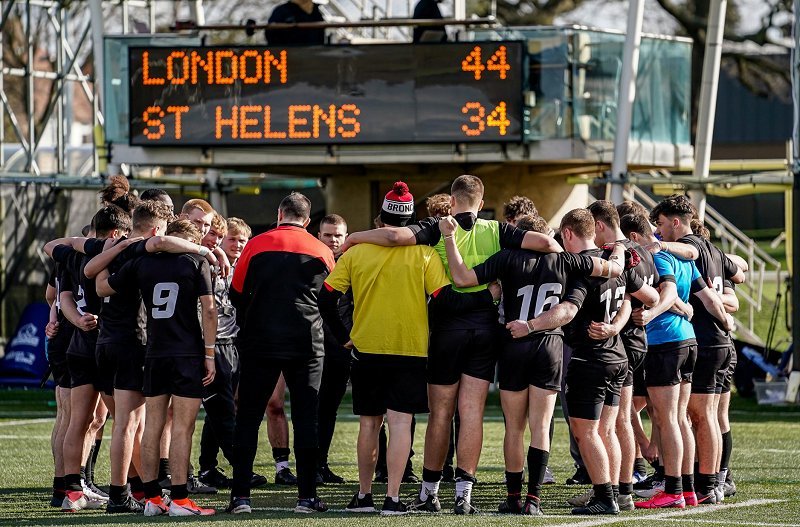 A below-par Saints performance saw the U18’s open their season with 44-34 defeat to a typically enthusiastic London Broncos outfit.

The game could have been so different, however had Jumah Sambou managed to finish his superb 50 metre 1st minute break. Taking debutant Jonathan Bennison’s pass, he broke down the right but with support on either side he went it alone only to be dragged down short. Despite forcing a drop out the Saints knocked on and the chance was lost.

This was a sign of things to come for the Saints and this was compounded with a penalty seeing the Broncos on the attack. On the last the grubber to the in-goal ricocheted wildly but the Broncos hooker reacted more quickly touching down his own kick.

The Saints hit back almost straight away taking advantage of a careless Broncos penalty in possession to score in the left corner. Lewis Baxter’s pass saw Reece Sumner go in from 30 metres. Shay Martyn’s great touchline conversion put the Saints in front.

We went further in front on 15 minutes when drives from Baxter and Jamie Pye gave the momentum for the Saints to run it on the last. The ball ended up in Martyn’s hands as the winger scored the first of his four touchdowns.

The sides then traded chances and tries for the final 20 minutes. A poor Saints pass to touch saw a try go begging before the Broncos levelled matters with try down their left.

The Saints go-forward was given much needed impetus by the introduction of Cole Appleby and Joe Woods off the bench. Martyn benefitted scoring his second from a fine Harvey McDaid miss pass.

The Broncos levelled again as the left winger and centre reacted better combining to go in at the corner.

On the stroke of the break good tackling forced the dangerous Broncos fullback into touch on his own 40 metre line. From the scrum quick hands and a well-timed pass from fullback McDaid saw Martyn go over for his first half hat-trick.

Coach Traynor called for more urgency in both attack and defence and this seemed to have been heeded as the Saints extended their lead in their first set after the restart.

Appleby was deemed to have been held up over the line, though the big prop thought differently. But two tackles later Bennison was putting Sambou through to score.

Two tries in as many minutes from the restart saw the Broncos turn the game on its head and take the lead. This topsy-turvy game continued with Appleby finally getting his first try at this level going in under the sticks from 10 metres after a good run from Sambou had put the Saints on the front foot.

Appleby was then sin-binned and in his time away the Broncos again scored twice to take a decisive 8-point lead.

The Saints needed to respond and back to a full complement they did as with 10 minutes left Martyn scored his fourth of the afternoon again in the left corner.

The Saints thought they had won it as Jamie Pye looked to have crashed over close to the posts only to be held up, but the Broncos wrapped it up with three minutes left scoring their eightth try again from a grubber which they reacted to quickest.