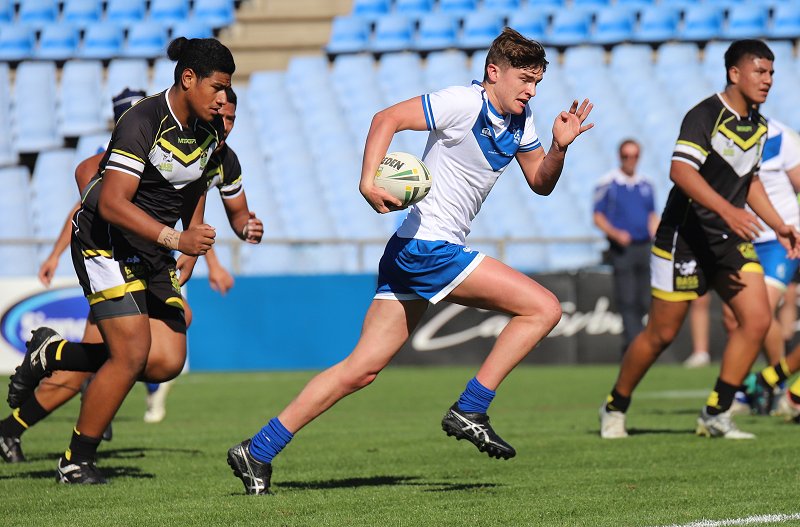 They are the only comprehensive school in the Peter Mulholland Cup and Bass High where it like a badge of honour. Watch their season opener against St Dominic’s LIVE at 12pm, Wednesday.

It is the only comprehensive school in the Peter Mulholland Cup, and Bass High wears it like a badge of honour.

The ultimate underdogs in the elite schoolboys league competition, coach Jon Wilson has instilled a sense of hard work in his students which sees early morning wake-ups and full-squad commitment a cornerstone of the school’s success.

The six-time University Shield champions will need every bit of that toughness and resilience as they prepare for a tough battle with Western Sydney rivals St Dominic’s on Wednesday.

WATCH BASS HIGH v ST DOM’S IN THE PLAYER ABOVE FROM 12PM, WEDNESDAY AND FIND OUT WHEN ALL GAMES ARE ON BELOW

The game will be exclusively live streamed by The Daily Telegraph at 12pm as part of a season-long deal to showcase the best emerging rugby league talent in the state. Hard running forward Bilal El Youseff will be one of the key returning players for the Bass High side. Picture: Jonathan Ng

Wilson, who also coaches the St George Dragons Tarsha Gale Cup side, believes his side will show an increased competitiveness in 2022 with most of his squad returning for this campaign.

“We are constantly trying to change up our game,” Wilson said. “We are basically trying to get more combinations on the field, we were a bit off the pace in that area last year.

“The players don’t get time off during the day to train together. Our boys are out there on the field at 6.30 and 7am before school each morning.

“A lot of our boys were in the younger age last year. I think we will be more on the pace this season.” St Dominic’s have been one of the unsung school sides heading into the Peter Mulholland Cup season, but there is always plenty brewing at the foot of the mountains.

The Penrith school has been a production factory for exciting playmakers including Greg Alexander, Brad Fitler and more recently Nathan Cleary and appear to have another leading the way in captain Liam Ison.

Ison was impressive for SG Ball premiers Penrith to start the season earlier this year, before he was cruelled by injury and missed the Panthers sizzling run to the title.

St Dominic’s coach Kyle Churchill said his side possessed the talent to shock the competition this season.

“I don’t think there’ll be much expectation on us and that’s something we are pretty excited about,” Churchill said.

“We’re probably going to have a bit of shock value and we’re backing the way that we’re going to play is going to be a little different.”