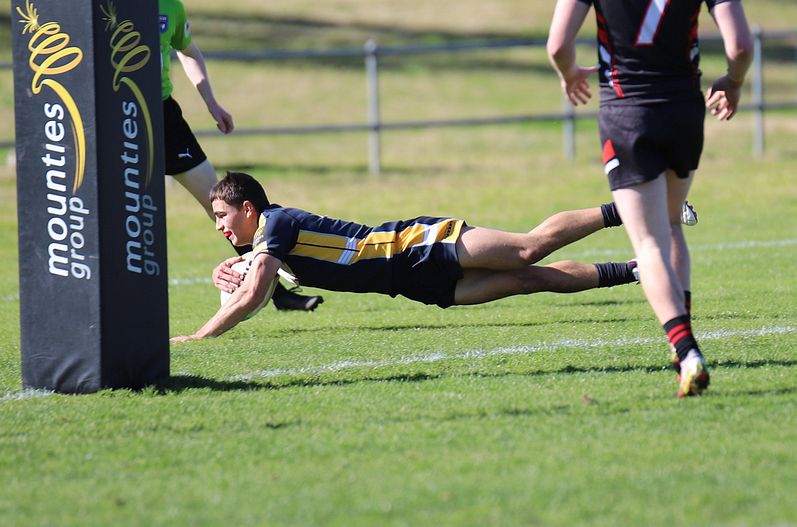 Westfields Sports High flexed their title muscles with a dominant 54-8 victory over Endeavour Sports in the third round of the Peter Mulholland Cup.

Up 22-8 at halftime, Westfields went on with the job in the second half, piling on 32 points and keeping their opponents scoreless.

Westfields coach Troy Weeden said it was a game of two halves from his charges.

“It was a slow start from us, but I was pretty happy with them in the second half,” he said.

“We were a lot cleaner with the ball and got a bit of traction with what we wanted to do, so it was a good result in the end,” he said.

It was tryfest in the second half for Westfields, with players including left wing Will Craig, right centre Daniel Waga and Lachlan Galvin among players to put points to their name.

Mapusoa finished the game with a hat-trick of tries, having outsmarted Endeavour’s fullback and Harold Matthews star Chevy Stewart.

Battle of the No.1s highlights heavyweight showdown One will pull on the green and gold of Australia later this year, while the other has set the Peter Mulholland Cup alight this season.

But there is one important thing that Endeavour Sports High fullback Chevy Stewart and Westfields Sports High’s Luke Laulilii share in common.

They will both play a crucial role in deciding which side wins their Peter Mulholland Cup blockbuster on Wednesday.

The two NRL nurseries will go head-to-head on Wednesday, with the match proving pivotal in the run to the NRL Schoolboys Cup semi-finals next month. All of the action will be live streamed exclusively through KommunityTV.

While both schools have proven their ability to work as a unit across the park, it is the game breaking ability of their number ones that is expected to define the clash.

This won’t be the first time the two custodians have faced off in a critical clash.

Stewart and Laulilii stood opposite each other in the Harold Matthews Cup grand final earlier this year playing for their junior representative sides, Cronulla Sharks and Wests Magpies respectively.

Stewart, who was picked at fullback in the Australian Schoolboys side following the Australian Secondary Schools Nationals earlier this month, has been on an incredible run of form.

While Laulilii missed out on playing at the ASSRL Nationals, his blockbusting runs from the backfield have been crucial in Westfields successful start to the Peter Mulholland Cup.

Westfields coach Troy Weeden, who was part of the Raiders recruitment staff that lured Stewart to the nation’s capital on a three-year deal earlier this year, has seen plenty of the two fullbacks in action and can’t wait for the battle of the ones.

“They are a pretty similar prospect to each other,” Weeden said.

“Luke and Chevy played in that Harold Matts final against each other, they both love playing in that loose field when they don’t have the structure around them.

“They would be two of the top players across the opening rounds of the competition.

“They are both tough kids as well. I think people don’t realise just how tough you have to be to play one. There isn’t a lot of self-preservation.

“Chevy is a good player, I have watched a lot of him playing this year. We have got a few weapons up our sleeve to stop him though.”

Stewart will not be the only recently capped Australian Schoolboys player on show in the blockbuster clash.

Westfields celebrated two of their players getting the green and gold nod earlier this month including Eels contracted playmaker Blaize Talagi and the largely unknown Sam Tuivaiti.

Tuivaiti came from the clouds to be named in the Australian Schoolboys side after several game changing stints off the bench for NSW Combined High Schools.

Weeden said the humble nature of the two talents was one of the key reasons for their rapid rise.

“Blaize had all the accolades but Sam has been a bit of a whispering talent for us,” he said. “No one knew him before he went up there (to Redcliffe). I was glad he got to show how good he is.

“I wasn’t surprised by the performance at all. He just brushes it off and gets ready for the next thing coming up. Both of those boys are like that.

“Blaize gets a lot of people pissing in his pocket but he takes it really well. He brushes it off and just gets to work on his game and what he needs to do.”

Check out this week’s schoolboys rugby league live stream schedule below and click the links to watch each match LIVE.