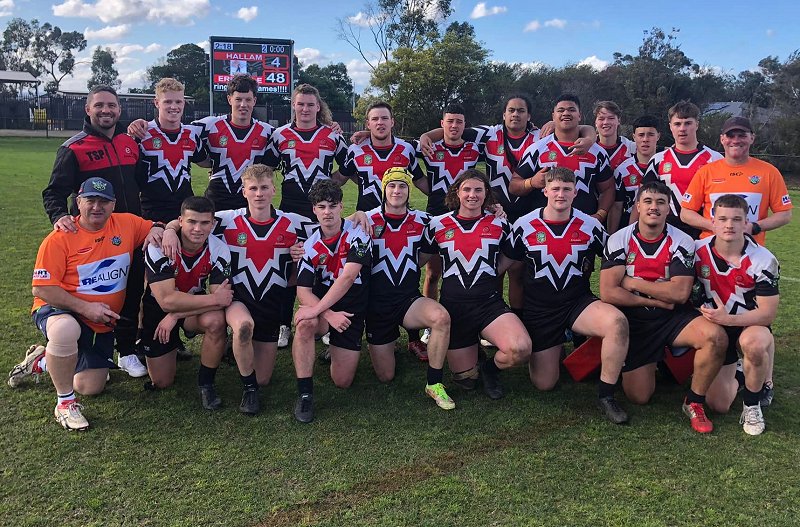 It was a try-fest for the visitors, who showed no ill affects of a massive day of travel in the final round of the Peter Mulholland Cup.

Interstate travel did not faze Erindale College, with the visitors running out comfortable 48-4 winners against Hallam Senior College in the final round of the Peter Mulholland Cup.

The visitors’ determination and precision showed why they remain undefeated, as they scored 30-unanswered points in a first half demoltion job.

It was left center Max Mercer who was the first to break the score, landing a try in the first four minutes of play.

WATCH THE FULL MATCH REPLAY ABOVE

With the next points coming in thick and fast, it seemed as though Erindale’s game plan was for each player to take home a try.

Wingers Alex Sweeney and Jack Clutterbuck, five-eighth Ethan Alaia and Jack Anderson all crossed the stripe in the space of 15 minutes.

The ACT nursery’s strength in the middle and outside backs did not hold off the home side for long, with Hallam’s Australian Secondary Schoolboys player and Jersey Flegg representative Josiah Neli claiming the team’s first and only try of the game.

Pleased with his team’s victory, coach Ash Barnes said it was a positive turnaround after an up-and-down performance against The Grange last week.

“We were able to go out and execute a lot of things we worked on during the week and I am happy with the performance they put in today,” he said.

They are facing a long day of interstate travel and missing a key cog in the spine, but Erindale college coach Ash Barnes is adamant there will be no excuses for his side not to finish the Peter Mulholland Cup regular season undefeated.

The proud ACT nursery are determined to finish their season at the top of their group, and build impressive momentum going into the finals series when they face Hallam Senior College at Melbourne’s Casey Fields.

The final round clash will be exclusively live streamed by KommunityTV through the Daily Telegraph and Herald Sun mastheads at 1pm, Wednesday.

It will be a mammoth hit and run mission for Erindale, who will fly into Melbourne on game day, and be back home before the end of the night.

Barnes admitted it would be a challenge for his players, but one they would not be shying away from.

“It might be a bit of a challenge for them but they won’t have any issues getting up for it,” Barnes said.

“We will give them a bit of education on getting to bed early, and we will do some activation exercises when we arrive in Melbourne.

“But the guys love their footy and I am sure they will be excited to get on the plane and experience that.

“It is an important game for us because we weren’t overly happy with our performance last week (against The Grange). We want to get back to what we do well and the players are itching to get on the field.

“Our second half was really poor, we completed under 40 per cent and gave away too many penalties. A lot of that comes down to a bit of focus on the field.

“We have done a review and the boys were more disappointed than I was in their own performance. They won’t have any excuses.”

Erindale will also be without impressive dummy-half and Raiders junior Xavier Cacciotti who suffered a cork to his thigh last week.

Hallam have been one of the surprise packets of the Peter Mulholland Cup, turning the tables on Victorian rivals The Grange in the opening round.

They also pushed Illawarra Sports High to the limit last Wednesday before eventually going down by eight points late in the second half.

A win over Erindale could send major shockwaves through the Peter Mulholland Cup, and give Hallam a late chance at earning the final spot in the quarter-finals.