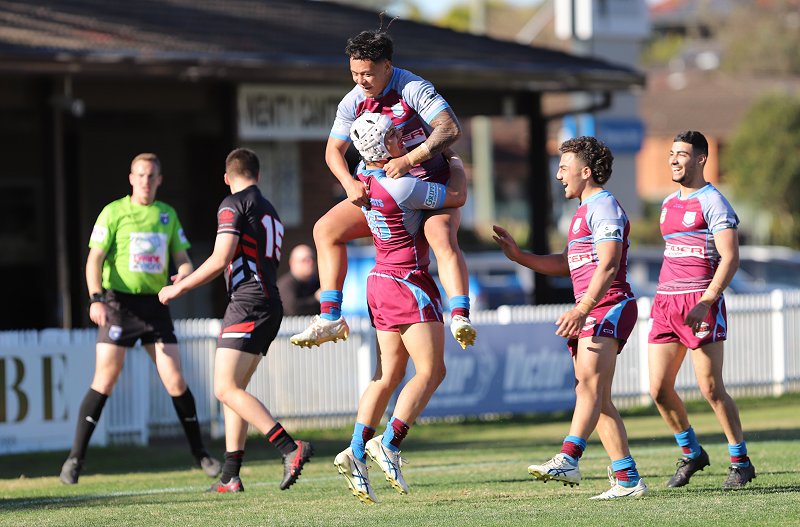 Endeavour have crashed back to earth with a resounding thud in the Peter Mulholland Cup as impressive Hills Sports went on a point-scoring frenzy. RELIVE the action from our LIVE STREAM.

Watch a full replay as Hills Sports vs Endeavour Sports.

Hills Sports High have stormed their way into the next round of the NRL Schoolboy Cup, after a clinical 44-10 win over Endeavour Sports High at Ringrose Park on Wednesday.

“It was great, we had a couple of our players out but still managed to find our combos and we gelled really well,” halfback Cassius Tia said.

The game opened with a massive Origin-like hit up, which saw players from both sides leave the field, before Endeavour scored off a great backline play orchestrated by fullback Chevy Stewart and finished by second-rower Koby Douglas in the corner.

But the home side responded before Endeavour could take a breath, almost instantly taking the lead.

It didn’t take long for Hills’ crafty halfback, Cassius Tia, to make his presence felt in the contest, scoring an impressive try through the middle of the park.

On the stroke of halftime, Tia setup Levi Smith-Mairiri perfectly in the corner to extend his side’s lead to 22-4.

Up by 18 points at the break, Tia said coach Scott Jones’ message was to “keep defending and working together, everything will fall off the back of that.”

Endeavour needed a strong start to the second half but were overwhelmed by the dynamic duo of Tia and fullback Blake Metcalfe, who combined through Endeavour’s defensive line for a asecond try to Tia.

The halfback struck again, setting up winger and fellow Rooster SG Ball representative Siaosi Kaliti in the corner from a high ball.

But the story of the day was Tia, who bagged a hat-trick.

But the humble halfback gave all the credit to his teammates.

“It was a great feeling, but I have to give full credit to the boys, our middles worked hard and let us play off the back of that,” he said.

PREVIEW: Endeavour and Hills not thinking too far ahead

After knocking off the defending champions and arguably the powerhouse side of the Peter Mulholland Cup in the opening round, Endeavour Sports High could be forgiven for thinking ahead to the pointy end of the season.

But coach Brad Kelly has warned, any fantasies of what is to come could remain just that if they don’t stay on task this week against Hills Sports High. Endeavour was impressive out of the gates, notching a hard fought two-point win over Patrician Brothers Blacktown, but it was not a season-defining success according to Kelly.

The coach has good reason to be tough on his troops, as they face a Hills Sports High side not only riding a wave of momentum from their own upset win in the first round but also bolstered by one of the more lethal one-two combinations in the competition.

“The pool games are good to win, it is good for morale and good for the team, but it is more important to make sure the team is building toward the back end of the year and is firing when we play the quarter-finals,” Kelly said.

“It was great to win (against Patrician Brothers), but we don’t put that much focus on what they can achieve this year this early on.” Hills Sports High proved too good for Westfields in the opening round of the Peter Mulholland Cup. Picture: Jeremy Piper

Hills Sports were equally impressive in the way they ran over the top of Westfields Sports High in the opening round, and will be excited for the return of strike playmaker Cassius Tia from injury. Tia will aim to reignite his slick partnership with fellow half Blake Metcalfe in the mouth-watering clash at Ringrose Park on Wednesday.

The pair have both come off dominant seasons in the SG Ball Cup with the Roosters (Tia) and Raiders (Metcalfe) and will be determined to find that form on the field.

“It’ll be great to have him (Cassius Tia) back, he’s an SG Ball grand finalist at the roosters and was in the NSW CHS team,” Hills coach Scott Jones said.

“We’re confident in our preparation, the boys have been great, getting through injury-free and we’re getting a few boys back.

“We’re excited about the clash, Endeavour are an extremely well-coached team that play with really good shape and we’re going to have our hands full trying to shut their player down.”