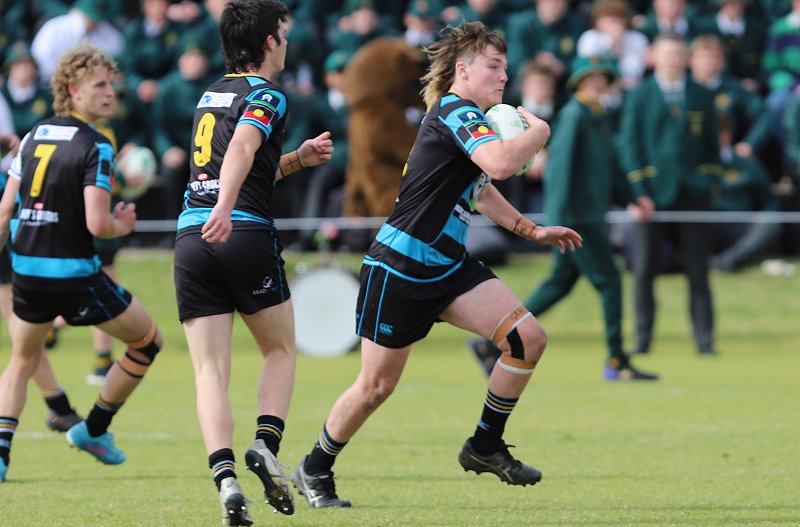 All Saints, Maitland climbed back off the canvas to draw 10-10 with Farrer as both teams picked up their first points of this year’s NRL Schoolboys Cup.

All Saints College has kept their Peter Mulholland Cup finals hopes alive after they escaped from the furnace of Farrer Memorial Agricultural High School with a solitary point.

A penalty goal to five-eighth Ashton Farrell in the final minutes levelled the scores at 10-10 with both sides unable to be split after a gripping 60 minutes.

Farrer had only kicked their own penalty goal two minutes earlier, and looked likely to clinch glory off the back of a dominant performance from front-row pairing Oliver Sykes and captain Will Woods.

But it was the wily efforts of All Saints College halfback Fletcher Thompson, who scored the only try of the second half, that pulled off the unlikely escape.

Thompson opted to take a quick tap in the final minutes and caught two Farrer defenders inside the 10 minutes. It forced the referee to send both to the bin and gave the visitors their shot to level the clash.

It was a see-sawing clash from the opening whistle to the last, but with the might of the Farrer supporters on the sideline, All Saints will be as good as winners on their bus ride back home to the Hunter.

The result took nothing away from the efforts of Farrer, who overturned an opening round 64-point loss to Patrician Brothers Fairfield into a grinding draw in front of a passionate crowd.

“She was a bit of a hard one out there, it felt like it was back and forth the whole game,” Woods said.

“It wasn’t the worst result and we ground it out to the last minute with only 11 blokes. It wasn’t the best result we could have hoped for but to have the crowd was great. It is amazing running out of the tunnel, they are cheering your name and they didn’t let up all game.

“We wouldn’t have gotten close to that result if it wasn’t for them.

A result like this gives a lot of confidence for the boys. We got smashed in the first round and the boys didn’t want to do that again, especially in front of the whole school. This was a big turnaround.”

Farrer had started the game on top, obviously fired up by the noise and excitement on the sidelines. The home side exploded out of the blocks and touched down through barnstorming backrower Logan Spinks within the opening 10 minutes.

An intercept try against the run of play for five-eighth Jordan Hamlin pushed Farrer two tries clear on the scoreboard and they threatened to run away with the contest.

But it was Thompson who masterminded the All Saints revival with a brilliant cut-out pass to send Lachlan Hickson over in the corner just before halftime before he levelled the scores after the break.

They are missing two of their most experienced leaders and driving into the furnace of Tamworth, but All Saints College are far from backing down from their toughest assignment of the season.

All Saints will make one of the toughest road trips of the Peter Mulholland Cup on Wednesday, when they face off against fellow country football institution, Farrer Memorial Agricultural School in Tamworth.

The game between the two regional rivals will be live streamed exclusively on KommunityTV at 11am, Wednesday.

It is an away trip only made tougher for All Saints with the exclusion of representative duo Myles Martin and Kaleb Garvie, who will both set their sights on the Australian Secondary Schools Rugby League Championships in Redcliffe.

But All Saints College head of sport, Elliott Plank, was adamant his troops were excited for the opportunity as they fight to keep their finals dreams alive.

He has also tipped one of the school’s future leaders to take on the challenge personally and stand tall in the face of adversity.

It is always a challenge going to Farrer

“It is always a challenge going to Farrer, we are both country schools from proud league towns,” Plank said.

“There is a couple of boys that have played in the side since Year 10 and we are earmarking them for leadership. We have Khynan Butler and Joe Green, it is a good opportunity to see where they are at and can take the team under their wing.

“They are natural leaders already. It should be a natural progression for those boys to step into those roles.”

Both sides will be desperate for a win after suffering tough first-round losses.

Farrer failed to score a point in their one-sided loss to Patrician Brothers, Fairfield but will have an extra player on the field in the form of a boisterous home crowd.

Farrer MAHS were beaten comprehensively by Patrician Brothers, Fairfield in the opening round of the Schoolboys Cup. Picture: John Appleyard

“We spoke (on Monday) about what it means to play at home. The boys are excited to have the home crowd there, it is a chance to play in front of their mates and in front of the whole school,” Sherlock said.

“(The players) grow another leg because of it, they find another level.

“We are limping through. We have been knocked around with the flu and have copped a few injuries. We are light on.

“It was a tough first game but the boys really responded well. We know where we are at and what we are up against.”