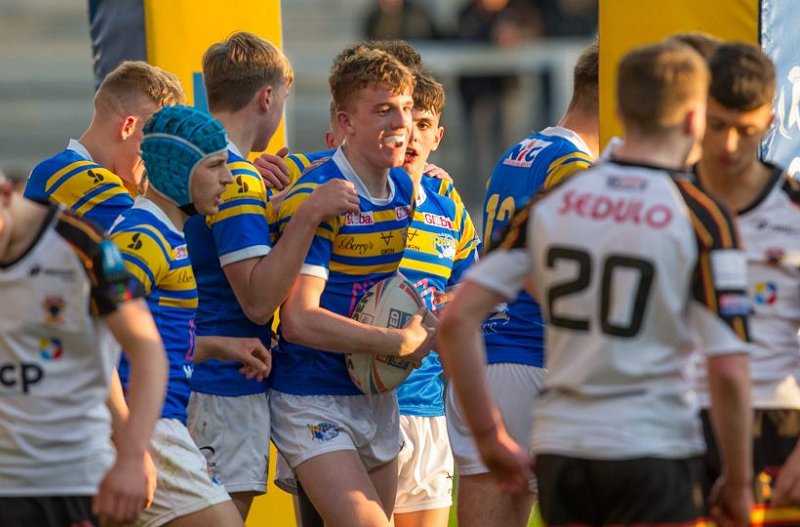 Leeds Rhinos Under-16s round off their 2022 season this Thursday night against local rivals Castleford Tigers Under-16s at Stanningley, kick off 7pm.

It’s been a great season for Mark Butterill’s side, who turned around losing their opening games to go on a four match winning streak.

Which started with a confident 60-0 showing against Bradford Bulls back in April. Hull KR and Wakefield Trinity were also dispatched on the road until the young Rhinos returned to Stanningley.

For the first time since 2019 to defeat Newcastle Thunder 62-4, thanks to a hat trick from Noah Whittingham.

Next year’s intake of players has already been announced for the Scholarship so this week’s game against the Tigers will be the last outing for senior players before the club announces the players moving into the Academy for 2023.

Castleford on the other hand have won two of their six games and draw once. Starting with a 34-34 draw against derby rivals Wakefield Trinity.

The Tigers put Thunder on home turf. Although they then lost out to Wigan, St Helens and Huddersfield, Rob Nickolay’s side won their penultimate game of the year against Hull FC by four points.

For the final match of the season, head coach Butterill has made eight changes to the side that defeated Thunder last time out.

Leading try scorer Lloyd McEwan-Peters, half back Fergus McCormack, winger Harry Taylor and second rower Archie Hurford are all senior players that return to the lineup.

There has has been a shuffle around in the backline too with Jack Wilson also returning in play alongside McEwan-Peters. The winger hasn’t featured since the win over Hull KR, while Harley Thomas drops out in place of Taylor.

The forward pack remains largely unchanged in terms of personnel but there are some positional switches.

The only ever-present player for the Under-16s Bobby Hartley moves back to prop, allowing Jacob Stead, who scored two tries against Newcastle, to switch to loose forward. Noah Whittingham also keeps his place, replacing Toby Marshall in the second rows.

On the bench, David Benson returns along with Alex Cowley, who was a late withdrawal from the Thunder game.

Joe Phillips moves out of the starting lineup to join the substitutes, while Callum Webster is also back to play his third game of the season for the Under-16s.

The team in full is:

Please note that this game will NOT be streamed.