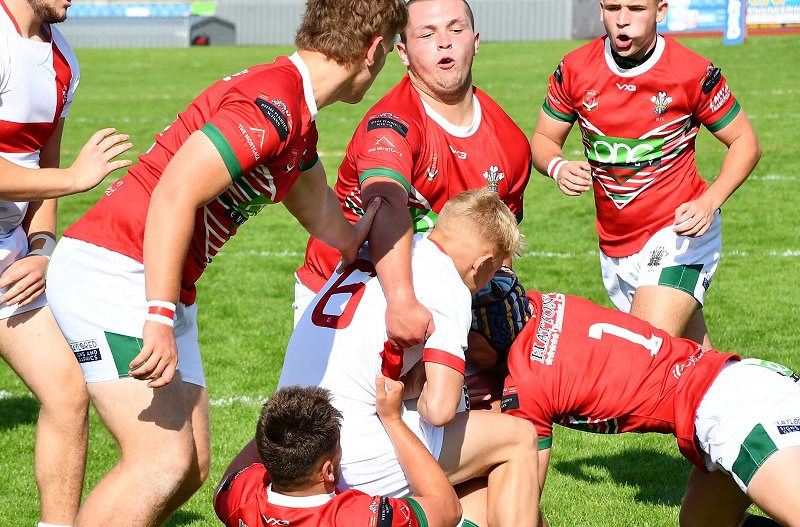 England Lions U16s won a hard-fought encounter with Wales 34-18 in Colwyn Bay on Sunday with the result in doubt right up until the last five minutes.

Wales, with a number of their players signing up for the official Wales Rugby League academy in Coleg y Cymoedd for September, gave a good account of themselves for much of the game, but in the end England’s experience took them over the line.

England took under a minute to take the lead after Wales made an error in the first set. Michael Sowden picked up the loose ball and Jayden Billy touched down from the resulting set. Oliver Whitford converted.

Wales hit back after seven minutes. Josh Hanson was the eventual scorer after two players were centimetres short in their attempts to get over the line. Isaac Morgan sliced the kick wide.

England regained the lead on 23 minutes when after a well-worked set, Billy notched his second, scoring near to the corner. Whitford missed the conversion attempt so England held just a converted-try lead.

Wales were close to pulling a try back before the break but Morgan Farmer-Gratton and Isaac Morgan were both held up over the line, leaving the half-time score at 14-4 to England.

Wales were first over the line in the second half, attacking from the off, and were rewarded when Ben Morris twisted his way over the line. Isaac Morgan’s conversion attempt slipped under the bar.

England regained their ten point lead when Scott Egan scored in the corner five minutes later in another try that went unconverted.

Wales hit back again through the try of the game when Isaac Morgan broke free on the wing and sprinted 40 metres to ground under the sticks. He converted his own try to leave Wales just four points behind.

But England were next to score when Jack Edge dived over in the corner. Sonny Cooper converted well from the touchline to give England their ten-point lead back.

A well worked try for Wales was next, with Farmer-Gratton the scorer and Morgan unable to convert.

But England sealed the game three minutes from the end when Ryan Joseph picked up an Edge pass to score in the corner. Cooper converted well.

Egan put the icing on the cake with a try in the final move of the game.