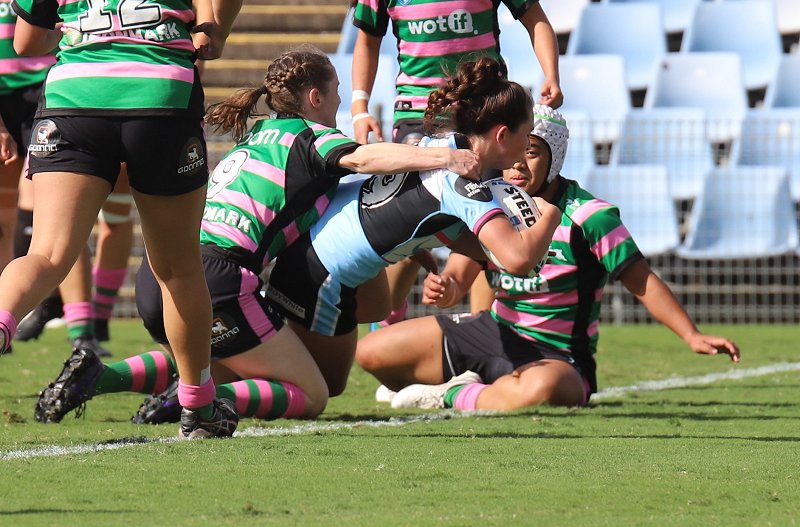 Quincy Dodd was named the Cronulla Sharks HNWP Player of the Year after a great but interrupted HNWP season (photo's : Steve Montgomery)

The Harvey Norman Women’s NSWRL Premiership season was sadly cut short, with the Sharks positioned nicely and ready to challenge for the 2021 title.

In recording nine wins and just two losses, the second of which came in the last round while missing their six representative stars, the Sharks finished the regular season in third position.

Coach Tony Herman had his team primed for an assault on the Finals, however the remainder of the season was eventually canceled due to the COVID lockdown restrictions, leaving the Sharks to ponder what might have been.

Despite the disappointment of how their year ended, the Sharks still had plenty of celebrate, primarily in relation to the overall efforts of their team, and secondly in following some outstanding individual performances.

Considering the form of the above mentioned, Herman and his coaching staff had a difficult job deciding the team’s best, with his two playmakers in Dodd and Studdon, singled out for the end of year accolades.

As with the junior reps, a presentation event wasn’t possible due to the current lockdown circumstances, with the 2021 Sharks Harvey Norman Women’s Premiership team award winners listed below. 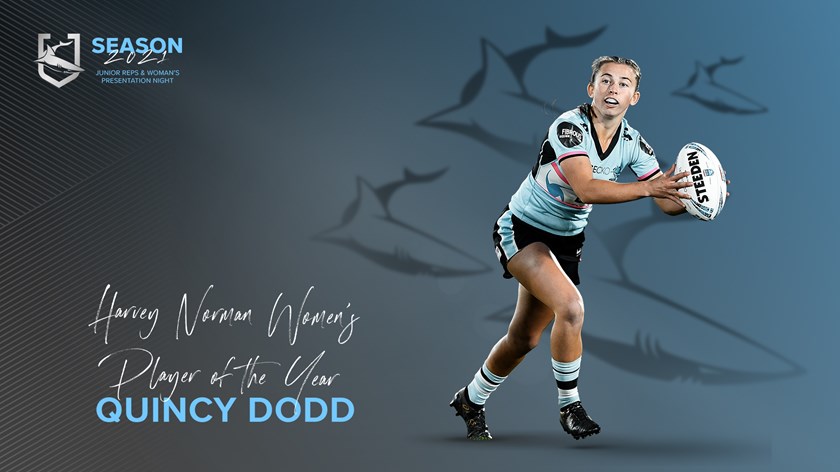 Integral to the Sharks 2018 Tarsha Gale Cup Premiership, Quincy Dodd has since transitioned from talented young half back to scheming dummy half.

Such has been her development and improvement, Dodd was this year included in the NSW Women’s Origin team to play Queensland.

Back at the Sharks and as explained by her Cronulla coach, Dodd was a standout throughout the year and deserving of the award as the teams best in 2021.

“Quincy was a local junior who returned to us this year from Canterbury and such was her form throughout the season she was rewarded with selection in the NSW Women’s Origin team,” Herman explained.

“She plays with high energy, has good speed and great ruck recognition and is a tough defender, all the attributes of a quality dummy half.

“Quincy played to a consistently high level all year and while we had a number of good players throughout the season, she is a worthy winner of our Player of the Year award,” Herman added. The on-field ‘general’ of the Sharks Women’s team over the past few seasons, Maddie Studdon again led the way for the Cronulla side in 2021.

Whether setting up tries or controlling the game with her clever kicking game, Studdon was always front and centre in leading her team around the field, with her efforts critical to the Sharks success throughout the year.

Her strong form obviously gained the attention of NSW selectors as she regained the half back position for the Women’s Blues, while her efforts certainly didn’t go unnoticed back at the Sharks, with Herman naming Studdon as his coaches award winner for the 2021 season.

“Maddie won her way back into the Origin team this year and was very good for us during the Harvey Norman Women’s season,” Herman said.

“A fierce competitor, Maddie is a great organiser, someone with a good passing game and excellent footwork and she was instrumental to our success in 2021.”