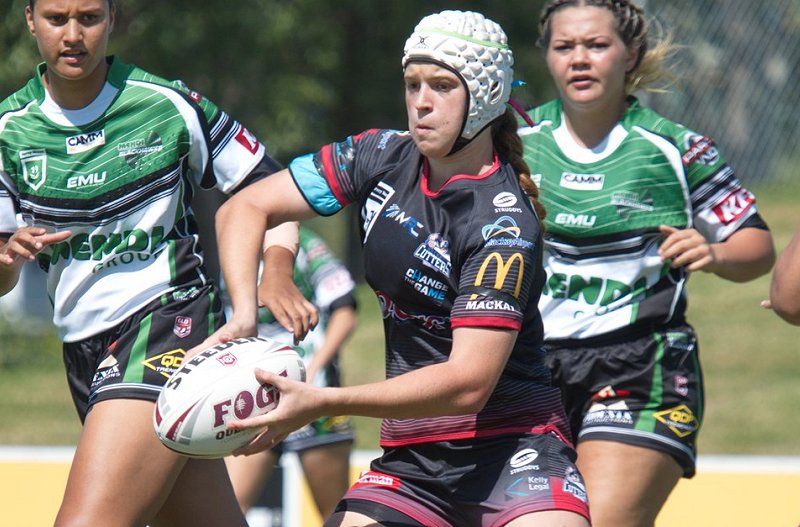 Emily, 17, is a cousin of former Queensland prop Martin Bella and like her namesake, enjoys the physical contact in defence.

That is where the resemblance ends when it comes to playing style, though, with the Mackay Cutters star a half with all the skills and an ability to lead a team around the paddock.

Bella has good taste in halfbacks that she looks up to and it is no surprise that Queensland’s best, male and female, are at the top of the list.

“There is Ali Brigginshaw in the women’s game… watching her play, she organises a lot and has a good kicking game. All-round, she is just a good halfback,” Emily said.

“I watched the Jillaroos play a few years ago and since then I have always tried to watch her games.

“I love defending and I like the organisation side of it, and having the vision to look up and play what you see like [Brigginshaw].

“In the men’s I always looked up to Johnathan Thurston and Cooper Cronk with how they played the game, their skills, kicking and their organising ability.

“It was inspiring to watch them play and their highlights, just to see how the game was played through their eyes too.”

Country coach Amanda Ohl said she looked forward to having Emily in the team for the clash with City on October 2, adding she was a very promising all-round talent.

“Emily is an organising half with the ability to control a team and get them around the park,” Ohl said.

“She also had a very good kicking game which you don’t always see in the women’s game.

“She is a very good defender as well. A highlight of our entire team is that ability to defend individually.”

Emily played in the Harvey Norman Under 19 competition at the start of the year and then under 17s more recently.

While playing for the Cutters in a North Queensland carnival, Emily had a feeling was she in the mix for selection.

Representing Country, the classy playmaker said, would be a proud moment.

“At the carnival when the selectors were there, it was pretty cool to play in front of them,” Emily said.

“They were giving a few hints away and coming up to the girls and coaches and asking a few questions about us.

“This [Country v City game] will bring the two sides of the state together and just shows what the country kids have to offer against all the city kids.”

She said Martin Bella – who played 21 State of Origins, nine Tests and 235 first grade games – had been an inspiration.

“Martin was a bit of stirrer,” Emily grinned.

“He ran the ball hard, hit hard and loved the aggression and contact. It is always good to have someone like him there who has had that experience. He is always there to ask questions of.”

Playing in the NRLW in the future is one of Emily’s goals.

As a North Queensland Cowboys supporter, she said she would be thrilled if they were to eventually get a team to play in a further expanded competition.

“That is the dream in the next few years,” Emily said.