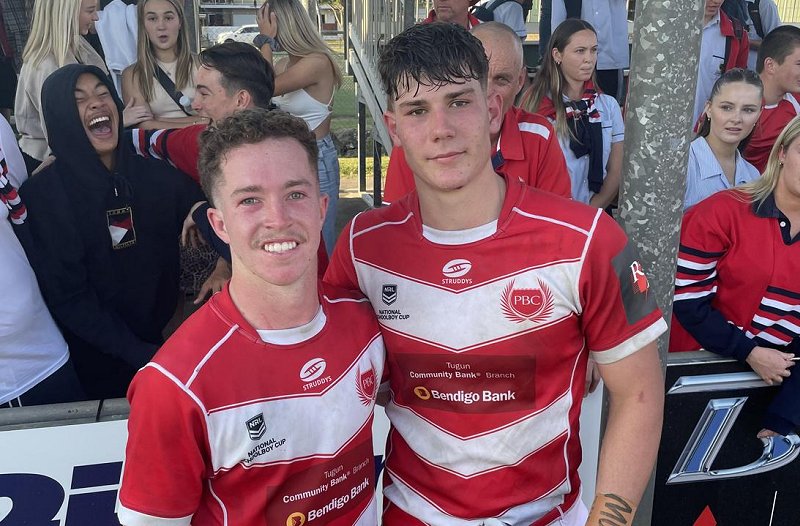 That match will be played on September 15, and will again be livestreamed by News Corp around the state, including www.couriermail.com.au, the Gold Coast Bulletin and through the Rockhampton region.

Who were the players of the three grand finals, and what did the coaches think? 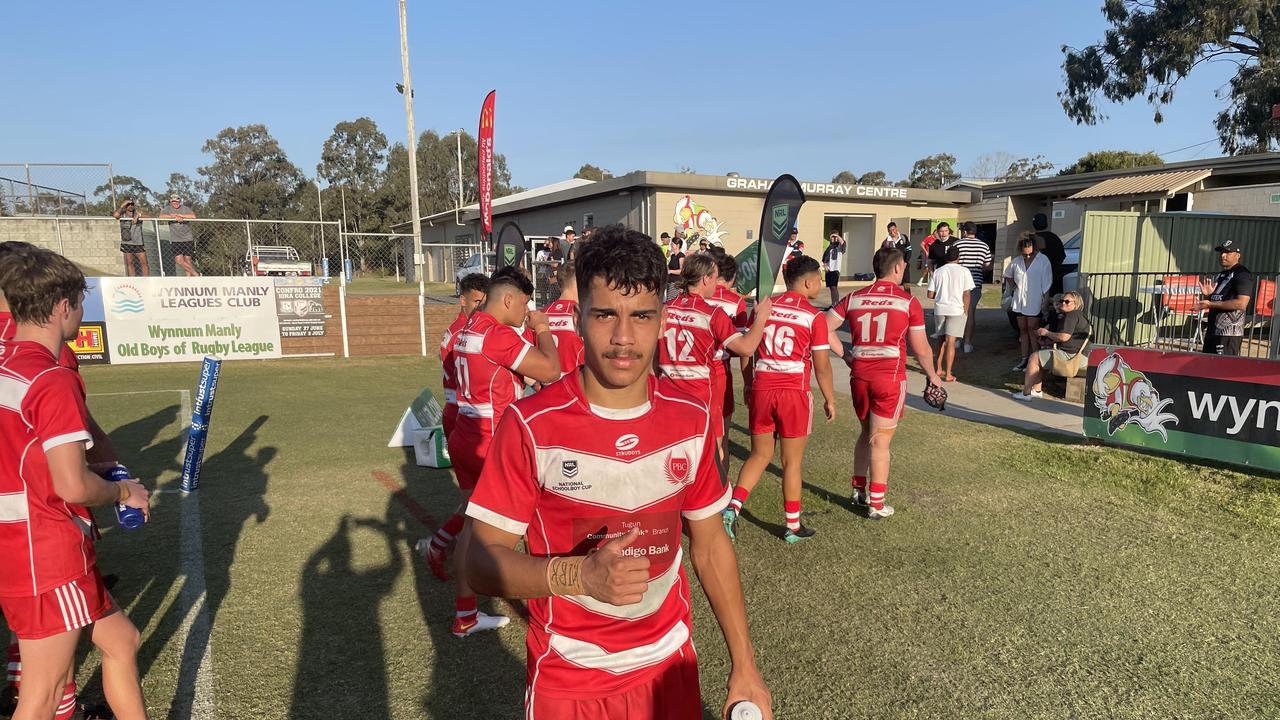 Man of the moment Michael Roberts.

Moving Roberts closer to the action from wing to five-eight proved a masterstroke of coach PBC SHS coach Tim Maccan.

Not only did the year 11 student scoop up stolen ball and run 80m to score the match-winning try – relive that try here – he also scored a smart individual try and put his winger Jett Forbes over for a try as well. Cowley rose to the occasion on the big stage to almost get his team over the line.

Before the match Wavell SHS coach Michael Roberts said the game could come down to which No.7 had the biggest say on proceedings.

PBC SHS’s Tom Weaver was a 7 out 10 performer yesterday, but Cowley was an 8 out of 10 and full marks to him.

In all the excitement of Roberts’ match-winning dash – and overall performance – Foran’s effort may be lost a little. But we will make sure here it is remembered for a long time.

Foran was arguably the player of the game, certainly the best forward on the park.

He finished with two tries, but he made run after run after run down that left side. His effort on effort is what got PBC SHS back level-pegging. 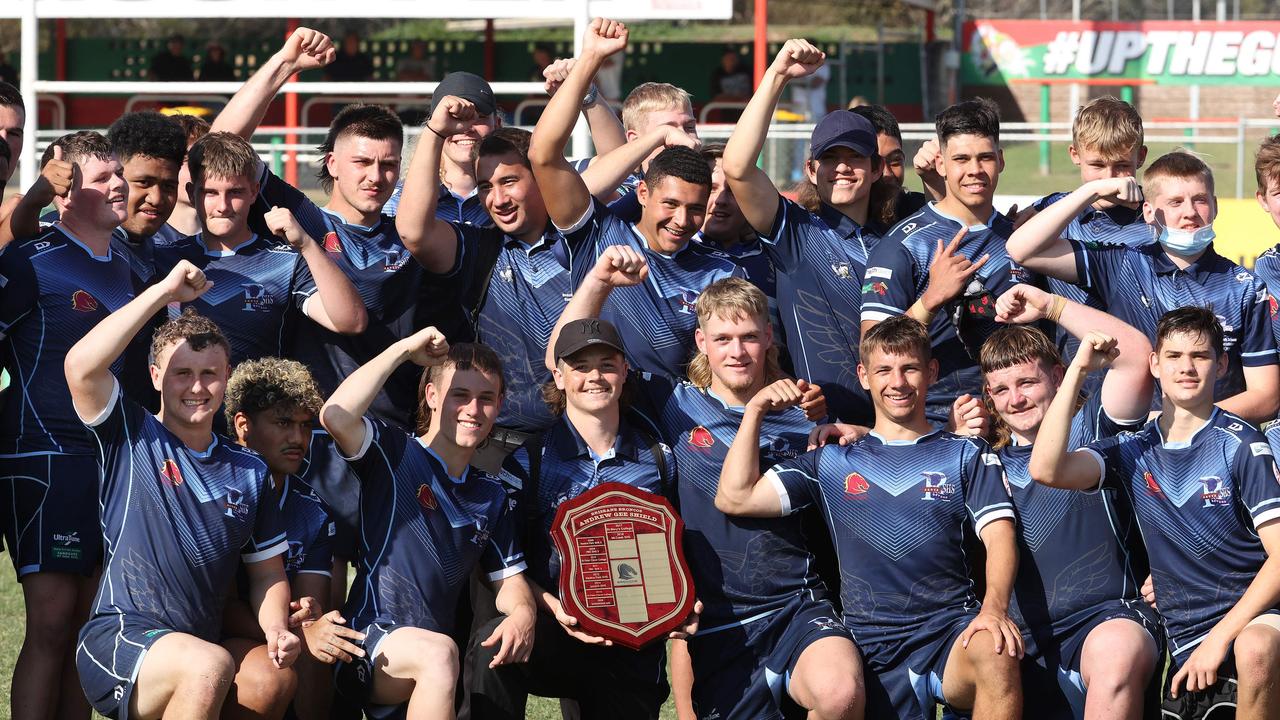 The big prop had a sensational opening burst to the match where he was the best front rower on the field – and that is saying something.

Like Cowley and Tyree Bowman (Marsden SHS), he came to the party on the big day, building on excellent semi-final form to lead the way on grand final day. 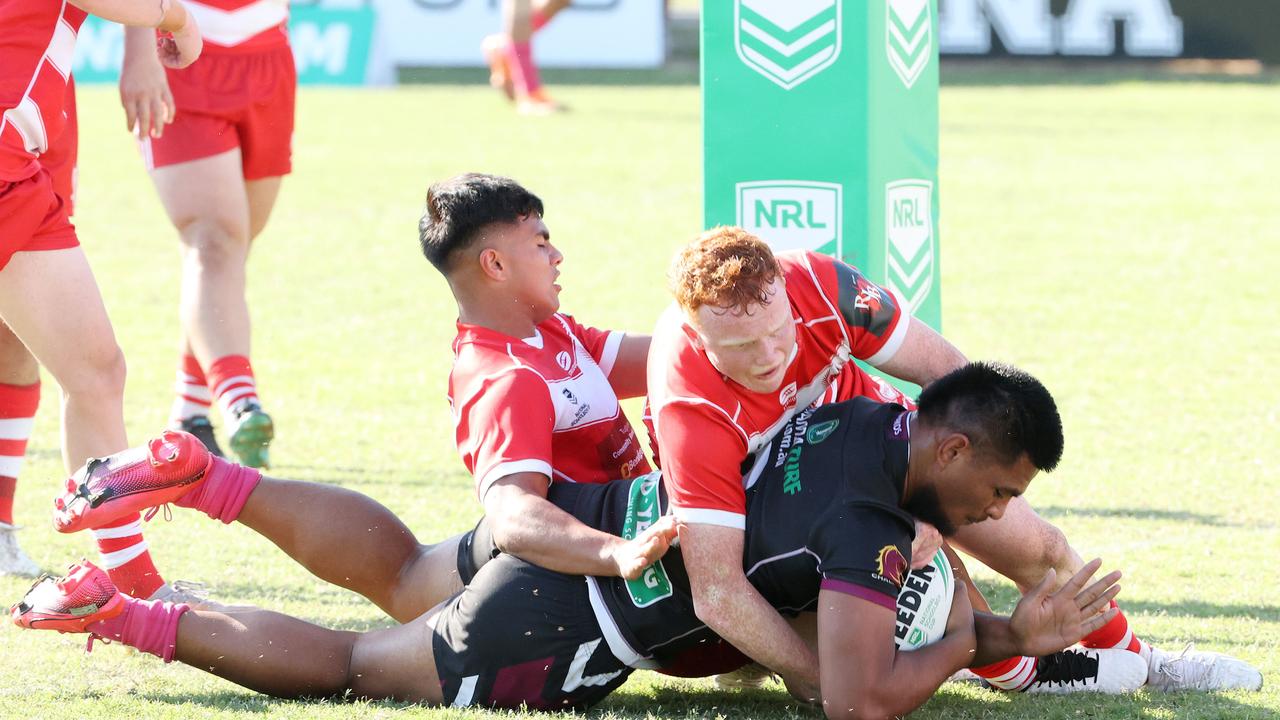 The boy wonder from New Zealand was highly influential in getting his team going from a 12-nil deficit.

Yes he had the advantage of playing for 10 minutes against a 12 man defensive line, but he also impacted against 13 men as well, don’t worry.

This kid who can ball play in the front line while also attacking from fullback is the real deal and watching him in 2022 will be a highlight. 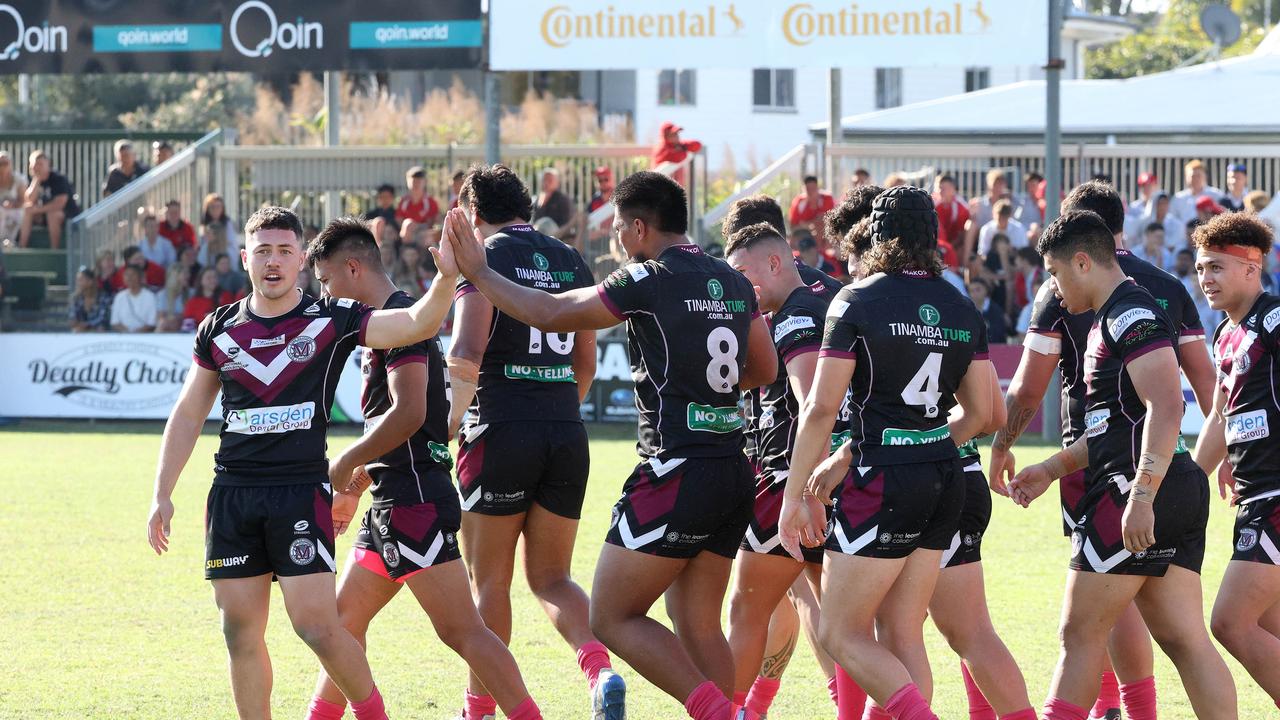 The Marsden SHS scored for the second successive week, but that was merely icing on the cake as he saved his best performance of 2021 for grand final day.

He also made a break six minutes from fulltime, but the PBC SHS cover defence scrambled so he could not put his support away for a match-winning try. His long time teammate Teapo Stoltman also finished his outstanding season with a fine effort.

Weaver was an outstanding puppeteer and Bryant still a force despite Marsden SHS clearing working hard to nullify his impact. 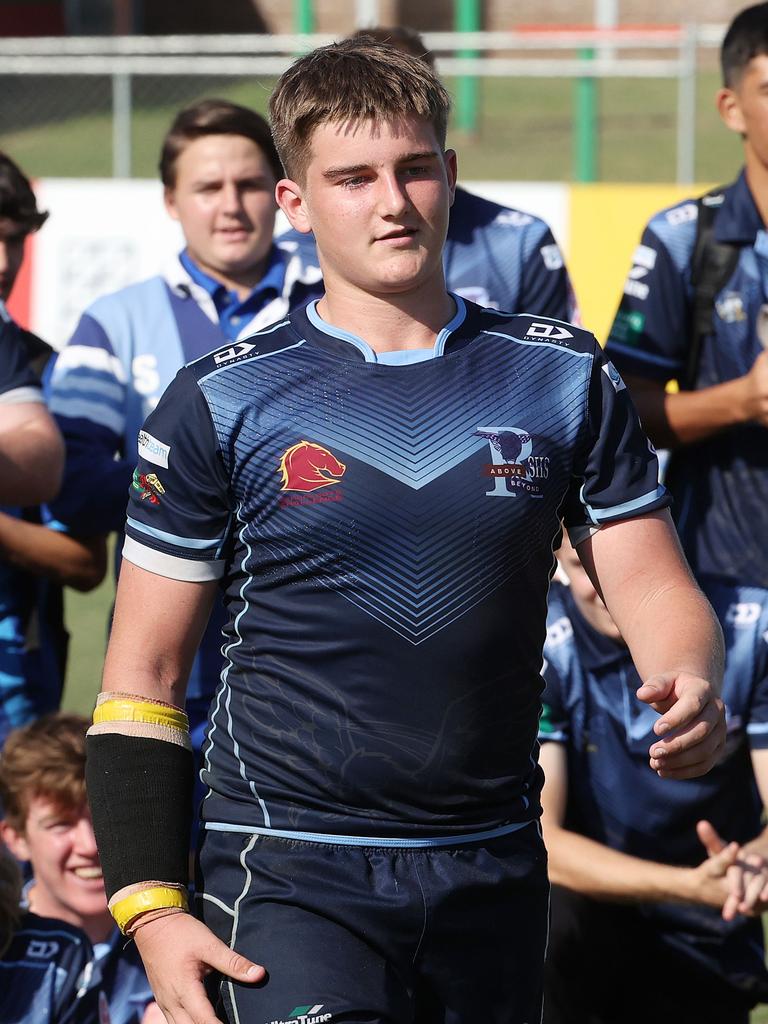 Cameron was formally presented with the man of the match award by Broncos’ great Matt Gillett for his effort in his team’s Gee Cup winning effort.

He is a very impressive dummy half who brings his pack onto the ball, knows when to run himself and tackles like Andrew McCullough.

The big striding, power edge backrower has that sprinkle of x-factor about him. He benefits from the go forward of his middles like Matt Bennett and Sefo Faatuono and Kiahl Moore, but he does reward those hard working tight forwards by threatening defensive lines.

Cameron deservedly won the man of the match but hats off to Major, Moore, Bennett and Faatuono.

Redcliffe lost only one match this season because they had an outstanding pack what would have challenged Langer Trophy squads had the side qualified. 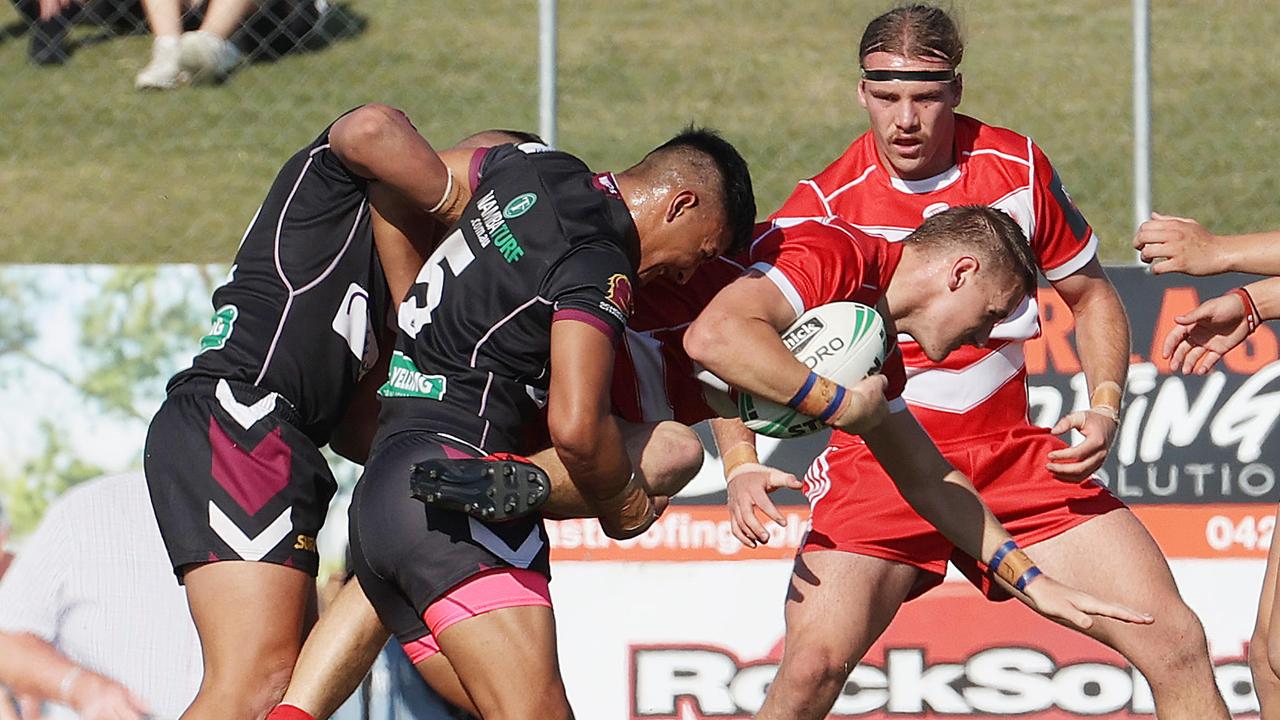 Behind a pack marching forward, McLellan produced a mini-master close. A Sunshine Coast Falcons product who is on the radar of the Melbourne Storm, the kid was worth the hype. And behind a winning pack, fullback Brooklenn Mundraby-Grogan looked a bit special. Caloundra SHS halfback and man of the match Tully McLellan with Matt Gillett.

We loved his effort, his enthusiasm, his fight in the tackle and his never say die attitude.

He was surrounded by outstanding teammates – including Chase Patterson and Brodie Halpin – but it was great to see someone like Gallagher do what he did on grand final day.

One senses he probably plays each match he encounters with similar gusto, but this was our first view of him and he should be proud of his efforts. 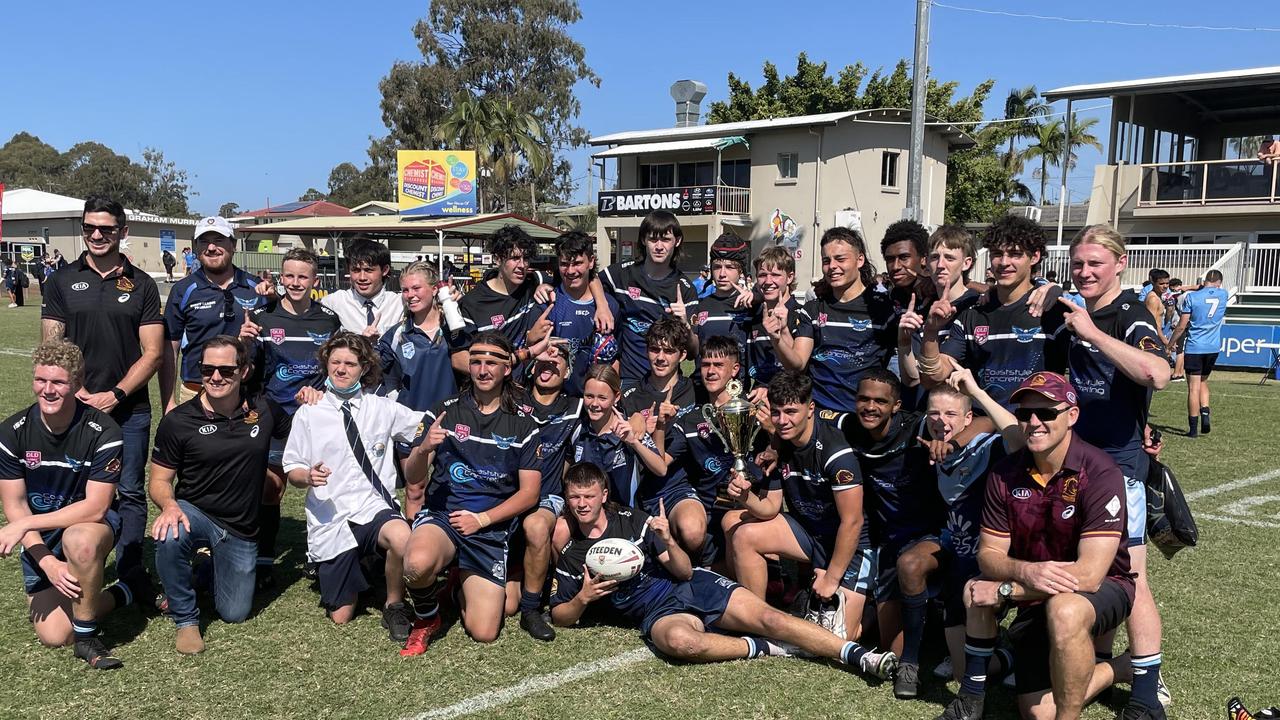 The grand final winning Caloundra SHS side – with Michael De Vere far right corner whom the competition is named after.

WHAT THE COACHES SAID

“That was a really tough game. We are busted. We lost two players during the game and that was just a dead set battering. They threw everything at us.

“We had to withstand all that.

“Ryan was the form backrower of the competition and warranted selection in the Australian schoolboys side.

“He is someone that if you want to go to war, he is the first you pick.

“Michael (Roberts), there is not much he can’t do. His big thing is learning when to turn it on, and when to be patient. And we are working on that.

“Kini did a good job reducing the amount of time he had with the footy, but he still had some really strong carries and did some really good things.

“Our team, this group of boys have a want to win, to turn up and be there for their mates.’’ “I would like to congratulate PBC SHS on their win.

“It is always hard to put into words the feelings that are associated with a game like that, but I was so proud of my Marsden team,’’ Hartigan said. “They showed amazing qualities across the 60 minutes.

“We had our chances to ice the game and no doubt we have learnt some invaluable lessons that they will take on their journey.

“I am proud to be a Mako and I can’t wait to continue to follow the next chapter that awaits out year 12 boys. 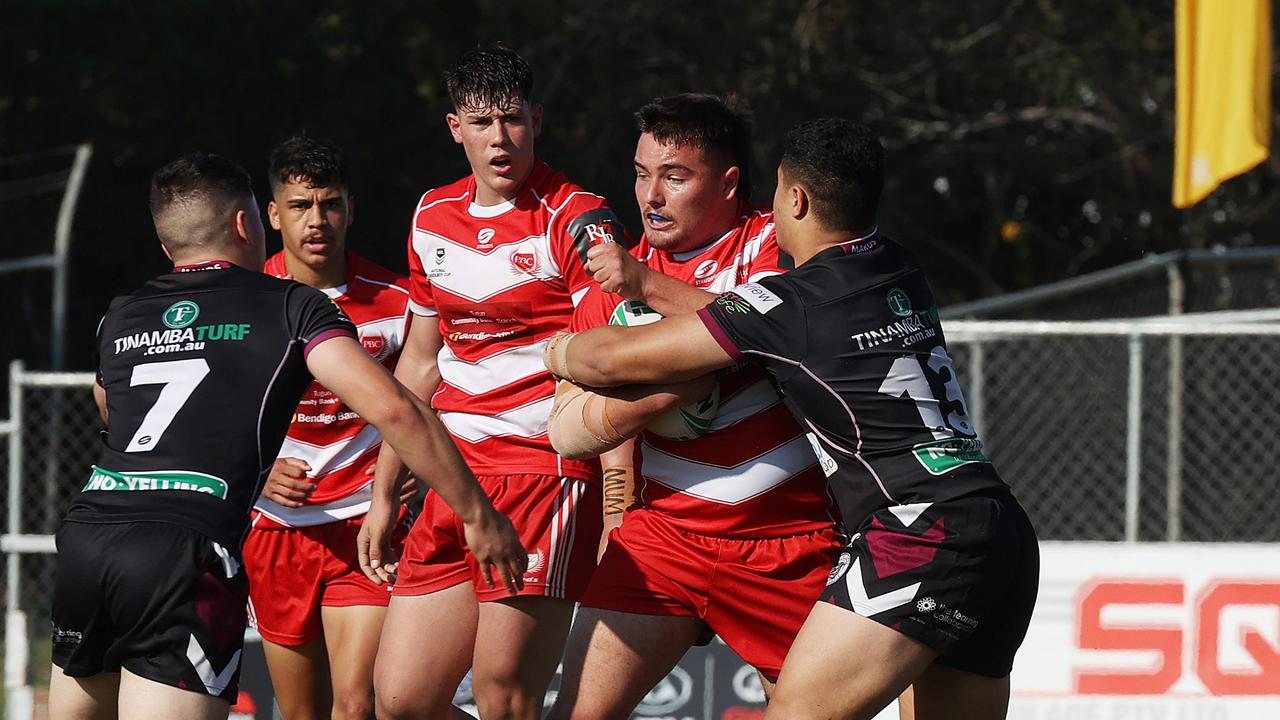 “We lost that one game to qualify for the Langer, and it was hard to get them back focused.

But to their credit we just said lets go again and winning the Gee Shield was important to us.

“We will get half half back (in 2022 chasing a Langer Trophy berth) which is probably ideal.

“They would have got a lot of experience out of today.’’

“I could not be prouder.

“Off the field they are outstanding and all they wanted to do was work together to get the result.

“There are no egos in this side. Everyone has a role to play and they turn up and do it.

“Everyone will make a mistake or go away from the game plan, but it is not about getting into them, it is about getting behind and saying ‘okay, you saw something and you backed themselves’ and that is always one of my last messages and they do back themselves and their ability.’’