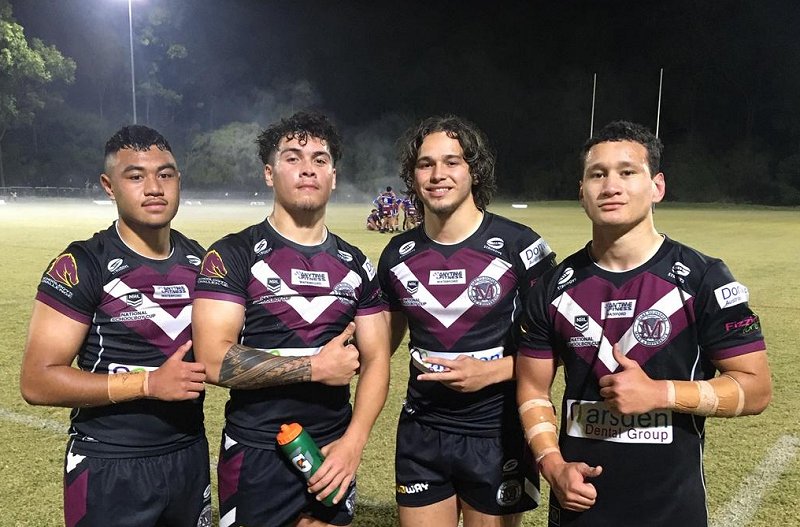 Langer Trophy title contenders Marsden SHS and Wavell SHS have played out a thriller in round 3 action.

In a thriller, Wavell SHS stormed the Marsden line after a fumbed ball had gifted them possession three minutes from time.

Wavell went left and right, then down the blindside and back again trying to find a way through.

Two successive penalties pushed them closer and closer, only to have big Wavell prop Felix Faatili lose possession in desperate defence. It was a pity because the big fella had a big impact on his team’s revival from an 18-6 deficit.

It was a ripping match which saw Marsden power game after the break carve a channel toward an 18-6 lead, only for Wavell to strike back when centre Tru Fotu put his winger Jordan Tut-Chapman over.

Trae Bennetto’s booming sideline conversion made it 18-12, 14 minutes from time and we had a grandstand finish to enjoy.

Off the back of Marsden’s big, mobile forwards coming onto Mako hooker Tyree Bowman’s passes, the home side looked most threatening.

But big Felix Faatili countered with his second coming for Wavell SHS, rallying his forwards with inspiring charges. 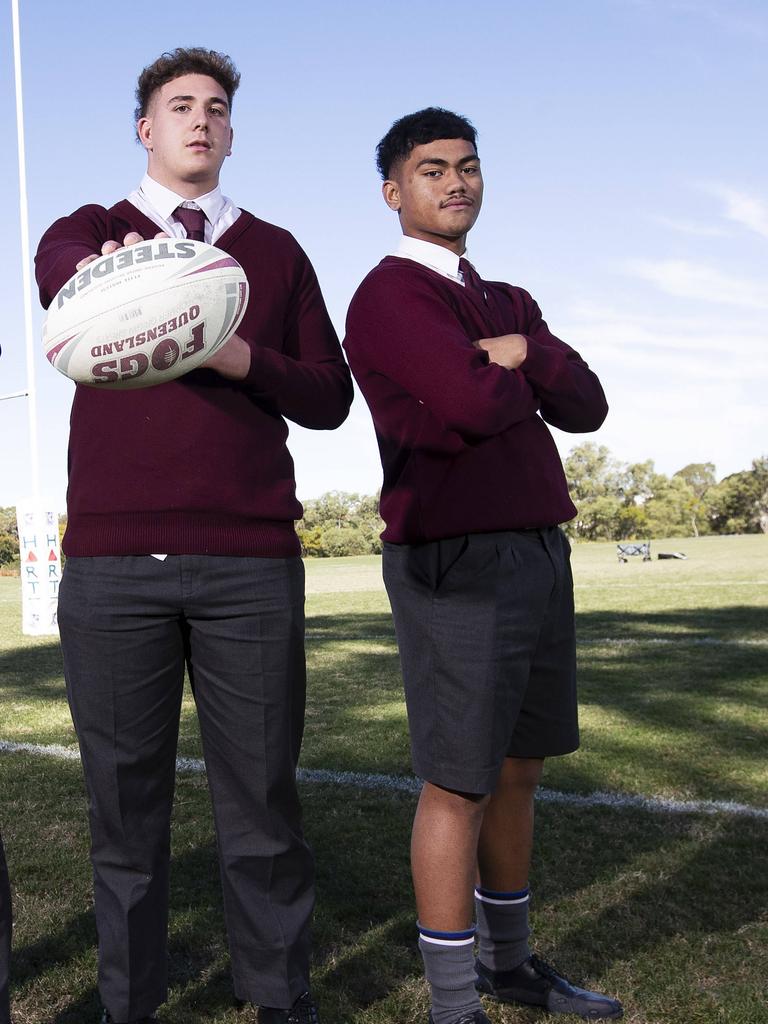 It was the mirror image of Oloapu’s sensational surge at the tryline in the first half which levelled the scores for Wavell.

Marsden were then able to score a second try of the half when Tea Rani Woodman blazed after a kick to get a touch first ahead of a desperate Wavell fullback Bennetto.

On approach to the tryline halfback Cowley worked some nice inside balls to his runners, but it was a wide shift which almost saw winger Woodman cross – only to be denied by a sensational covering effort by fullback Trae Bennetto.

Both teams had the first half fumbles, and the first side to arrest its handling in the dew was always going to be the side most likely to hit the winners post first.

Marsden SHS second rower Eli Tuli powered his side to a narrow 18-12 victory over Wavell SHS this afternoon.

Watch all the replay of the Kevin Walters Cup / Allan Langer Trophy – Round 3 – Langer reserves.

It is little wonder the Marsden SHS Langer Trophy side is travelling well when you have someone like Tuli in reserves.

It was a tense climax to the match after a surging midfield try from roving Wavell winger George Henry-Monaei raised Wavell’s mast 11 minutes from fulltime after Marden had led 16-6. A bullocking run from Marsden reserves captain Mou Taumaletila-Maulolo put Marsden SHS in front, giving his side a 12-6 advantage at the break.

And Marsden were first to score into the second half when Eli Tuli powered his way to the tryline.

Some creative play from Marsden SHS Dom Sandow almost engineered another Marsden try, but an inside pass went to ground.

Then a Tuli pass in a tackle to Sandow created a chance, but the pass was low and Sandow failed to handle off his right knee. But Marsden were heading in the right direction. 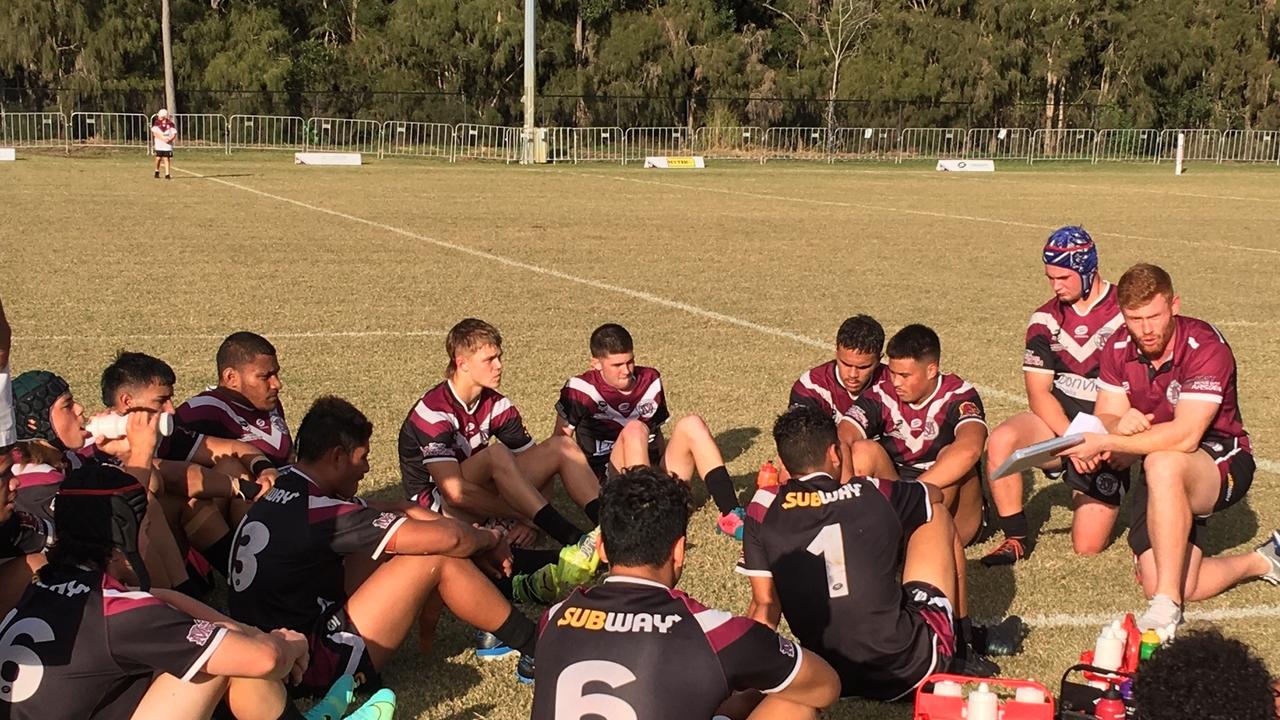 The Marsden SHS reserves listen to the halftime talk.

Earlier, the sheer pace of Kallum Weatherall-Stacey saved Wavell’s bacon after Jodeci Letalu had latched onto an intercept for Marsden SHS.

Letula was reigned in by Weatherall, forcing a pass to Haizyn Mellars who was cornered by Damon Coldwell.

Weatherall then used his pace two tackles later to run an attacking kick by Marsden’s Cody Hamilton dead over the dead ball line.

The game was only two minutes old when Wavell’s Sese Nati chased through a grubber kick which had been threaded behind the line to score.

Marsden responded with a lovely left passing movements across the backs, with Dom Sandow putting his winger Shane Rapson in to score. Wavell SHS struck a blow across the bow of the home side with an impressive 22-14 Walters Cup win.

Hot on the heels of the Hancock Cup (Year 9s) victory earlier in the afternoon, Wavell came from a 8-4 halftime deficit to chip past their rivals and secure victory.

Wavell’s effort was again led by representative middle forward, the mobile Prestyn Laine-Sietu, but he had plenty of helpers.

Behind his pack Salei played a steady role, not over playing his hand or losing his head in a tight contest.

The game was put to bed six minutes from fulltime when dummy half Jai Camilleri went himself and scored.

This was after Marsden SHS prop Sani Ten inched his side ahead right on halftime when he scooped up a grubber kick to score next to the posts, but Wavell hit the front early in the second half when winger Riley Jenkins skidded over.

Salei’s booming sideline conversion carried his team to an 10-8 lead.

From the restart Marsden Lucas Miller and Mark Tuialli pulled off bruising big hits, but Wavell absorbed the punishment to kick themselves to safety.

Marsden SHS interchange forward Elijah Leatigaga gave his team a sniff three minutes from time with a charging try, but the better side won.

Both teams meant business, and a more even half of football you could not have imaged.

Camilleri (Wavell hooker) and Jacob Tinsley (Marsden) were a dangerous off the back of his forwards when they got rolling, but it was very much anyones game. Earlier, Both teams traded tries across the first half.

Marsden SHS struck an early blow when Jacon Tinsley capitalised on his team’s territorial domination to dive over from dummy half four minutes into the clash.

Then Bailey Leech found his way to the tryline in the right hand corner and it was locked up 4-all.

Earlier, Wavell’s Oloapu mesmerised his opponents with his twinkle toes effort from 10m out which finished with him gliding over beneath the posts after subtly changing direction.

It was the type of classy effort one comes to expect from Oloapu who is in dashing form to start the competition.

The try came against the run of play after Marsden SHS had had the better of the territory advantage.

Marsden SHS looked dangerous, but some simple handling errors left their opponents off the hook.

Wavell players run through a tunnel.

Most dangerous was the left side raids where Tangimatatiti loomed, and there were attempts to get Will Semu into the game, but Wavell held firm.

However, Marsden’s next big chance came in the seconds leading up to halftime, but another handling error curtailed Marsden’s chances of scoring.

Earlier, big Xavier Stowers opened the scoring for Marsden SHS with a close to the line burst after his team picked up the tempo of the game and played their way down the field.

Action from the big clash at Marsden.

Off the back of left edge forward Nathaniel Tangimataiti Marsden SHS went on the attack again, with a deceptive kick from half Cassius Cowley going perilously close to bouncing into the hands of winger Tea Rani Woodman who had raced after the ball like a greyhound chasing a lure.

Wavell prop Felix Faatili, had also started well with some nice footwork and handling deceiving his rivals who may have expected a power game to start the match.