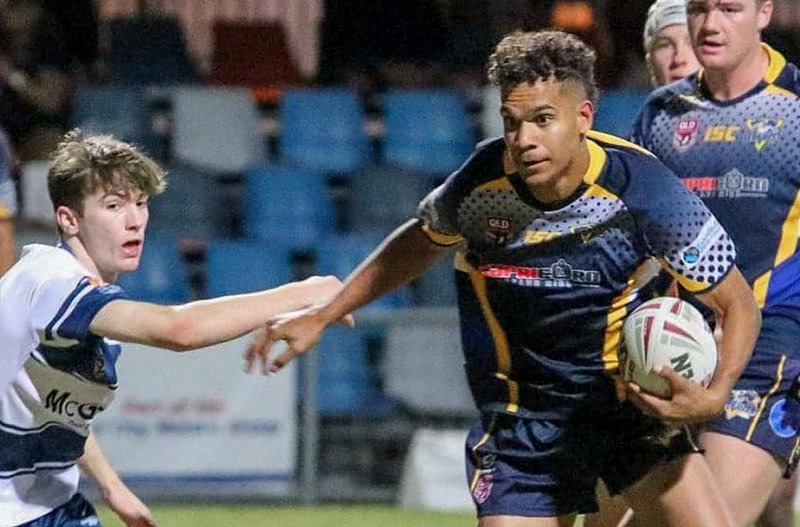 An enthralling hat-trick from Yeppoon Seagulls five-eighth Matthew Hill was the biggest talking point of Rockhampton junior grand final day as the dynamo back turned the tide to set up an exhilarating final minutes of the under 17 decider on Saturday.

Revellers were on their feet as the dynamo back brought Yeppoon back into the contest against Rockhampton Brothers in an edge-of-your-seat final match of the day, making it a perfect ending to fantastic day of junior league action in the beef capital.

It was a chilly start to the 2021 big dance with frost covering Browne Park early, though this was just a temporary event, and as the day heated up – so did the footy.

For the first time in the history of the league, seven deciders where held – which included the under 15 and 17 girls, which are generally held later in the year.

All games were played in great spirit and the support from the family and friends was outstanding.

As Rockhampton and the Capricorn Coast are large boarding school districts, all games were broadcast live so that family from afar could watch and they did, with comments from the Torres Strait out to Mount Isa, over the borders to Katherine and Sydney and across to New Zealand.

To kick-start the day, both Rocky Tigers and Norths Knights have been close all year in the under 13 age group and met in the final after battling it out with the top four sides in this age group – all within two competition points at the end of the regular season.

Norths didn’t get off to the ideal start with a mistake in the third minute from the scrum, allowing Harley Biles to score in the corner to open the scoring.

A string of penalties from Brothers brought the Knights into their territory which gave Alex Fuller a chance and he scored next to the posts and with with the conversion, they had the lead.

Both sides worked back and forth and in the last two minutes of the half, a grubber kick was put through and big Jacob Murphy was on the spot for the try and Brothers went into the break 10-6 up.

In the second half, Brothers started strongly and by the halfway mark, were leading 22-6 with tries to Marcus Tipman and Archie Lloyd. Norths hit back shortly after with a try to Tyrese Wise and they started their comeback, but it was short-lived with Mitch Carr sealing the grand final with a 28-10 victory.

The under 14 decider was always going to be tight affair between Tigers and Cap Coast and that’s the way it panned out with both sides defending their territory with strong tackling.

It took until the 13th minute of the half for the first points of the match – Cap Coast front rower Ethan Nona crashing over to take the lead 4-0. These were the only points of the half as both sides gave their opponents no field position to try and score.

The second half was a different story and Tigers found their groove. In the fifth minute, Jack O’Neill crashed over from dummy-half and Tigers had the lead 6-4.

The black and orange really started to trouble Cap Coast and again O’Neill found his way through for his second try and a 12-4 advantage.

Cap Coast tried to fight back but in the last minute, Caleb Hare scored and with Jaiden Savage’s perfect day with the boot, Tigers won 18-4.

In the first of the girls grand finals, Rockhampton Tigers under 15s started very strongly when they jumped out to a 22-0 lead at the 17th minute mark with tries to Mackayla Champion, Louanne Dale and a Caydence Fouracre double. But a changeover saw Emu Park with some good ball in the opponent’s territory and Mackayla Oakley started to turn things around when she crossed for two converted tries to make the half-time score 22-12.

Tigers started the second half strongly when they scored tries through Jaslene Fetoa’l, a long range effort from Gabrielle Yarrow and Champion getting her second.

But this again sparked Oakley as she brought up her hat-trick for the Emus, but that wasn’t enough with Tigers running in further tries to Tori Dankin, a double to Zoe Robson and to add the cherries on top, Dankin got her double on full-time.

Cap Coast and Rocky Tigers have a history of close games and this was going to be no different in the under 15 decider.

Both sides tested each other out and for the first 10 minutes, they looked like they were waiting for a mistake from their opponents.

Finally, Cap Coast were able to get some field position and it was hooker Liam Welsh that got over the line and with the conversation, held a 6-0 lead.

Tigers finally got into some attacking position and a deft kick saw Clancy Hohn pounce on the ball to score; but at half time Cap Coast held a slender 6-4 lead.

The second half saw Brothers jump out of the blocks and it was Braith Lorenz who cleaned up a dropped kick and broke his way through the covering defence to score. The sideline conversation from Rokoko Hunt put Cap Coast ahead 12-4.

Jett Day then got himself involved in the game for the Coast and a strong run saw him score to extend the lead 18-4 with 17 minutes remaining.

Both teams tried everything and finally in the last minute, Baylee Meiland scored a consolation try for the Tigers to make the final score 18-10 to Cap Coast. Both Cap Coast and Rocky Brethren sides in the under 16s contain Capras Cyril Connell Challenge representative strike power and the start was going to be interesting to see how both coaches’ game plans would play out.

For the first 15 minutes, both sides did have chances, but good defence was able to hold both attacks out.

Brothers Blue got themselves within 10 metres of Cap Coast’s line and Jack Biles charged over for the first points of the game and a 4-0 lead.

This looked like the half-time score until Grady Wright used his strength to get another try for Brothers and claim a 10-0 lead at the break.

At oranges, Cap Coast regrouped and in the fourth minute of the second stanza, Matthew Groves powered over and Cap Coast were back in the game at 10-6.

Both sides then tested each other but missed opportunities, then winger Mataio Tapau-Bon dived over out wide and the game was all tied up at 10-10.

Then Cap Coast fullback Izaiah Waters opened up his opposition’s defence with a stunning 70-metre run and the Coast had the lead for the first time at 16-10. Brothers had 12 minutes to square the contest up but mistakes at crucial times stuttered their chances and in the last minute, Finn Smallwood crossed to seal the Cap Coast win 22-10.

The second last game of the day was the first under 17 girls grand final that was played in conjunction with the boys, and this decider was always going to be a game filled with skills as plenty of players were on show who have represented the Capras in the Harvey Norman Under 19 competition this year.

From the start, it looked like Shauna Burnham’s day for the Tigers when she crossed twice in the first seven minutes to gain a 12-0 lead.

Brothers halfback Prue Peters showed her strength when she crashed over and got her side back to 12-6, but Tigers captain Lillian Yarrow wanted to swing the momentum back and she scored and extended the lead to 12 again.

It was all Brothers in the final 10 minutes, getting on a roll when Ruby Frost and Sophie Davidson scored, locking the game up 18-18 at the break.

The second half started with some physical defence and Tigers were able to strangle back the lead when Luca Howarth scored.

This fired up the Brethren and they hit back quickly when Lalequa Sorgoro scored, but the missed conversion kept the Tigers in front.

The black and orange kept attacking Brothers’ line, but to no avail as they came home strong with Peters getting her second and Davidson sealing the game for Brothers 32-24.

The final game of this year’s grand final day did not disappoint with Yeppoon and Brothers going toe-to-toe in the under 17 big dance.

With two quality sides taking the field for the decider, the Seagulls looked strong early but were denied a few times by the Brethren defence.

Brothers got an opportunity from a penalty and a quick play-the-ball saw Darcy Williams go from dummy-half and score to take a 6-0 lead.

Brothers were soon back in Yeppoon’s red zone and a sweeping backline saw the Seagulls caught short and a try to Brad Taylor ensured a 12-0 lead.

But then enter Hill – Yeppoon’s livewire fullback. In the space of five minutes, he individually turned the game around with some fancy footwork seeing him score twice to level the game 12-12 at the break.

He was again in the thick of the action in the second half scoring another individual try and for the first time in the match, Yeppoon had the lead 18-12.

For the next 15 minutes, both sides tried hard, but no one could break the defence.

Then, with eight minutes left, Yeppoon were attacking hard and had shape when Brothers’ Luke Callanan intercepted the ball 80-metres out and ran the length, but good Seagulls cover defence kept him from scoring near the sticks, crossing in the corner with a chance to level the game up; albeit from a very challenging position. Angus Gabriel was tasked with levelling the game up, but unfortunately, he was unable to convert.

In the final six minutes, Brothers threw everything at Yeppoon, but mistakes at critical times let them down and it was Yeppoon claiming the final premiership in an absolute thriller.

The RDJRL would like to thank sponsors Rockhampton Leagues Club and the Rockhampton Senior Rugby League, Amanda Pearce, Emma Cunnington and Cameron Stallard from the QRL for all their assistance with the live broadcast.

Also, thanks goes to the Rockhampton Referees Association, all the players, coaching staff, volunteers, family and friends that have supported all the players.

The League would like to wish all the players that may be leaving juniors this year all the best on and off the field.