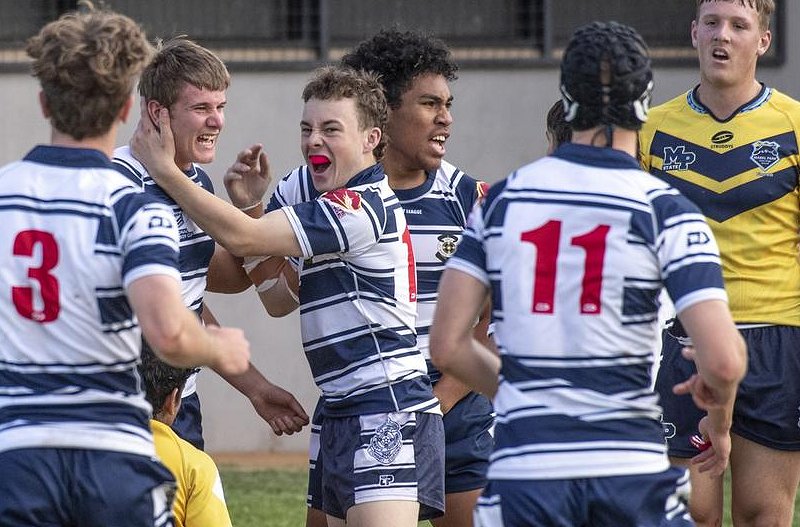 Langer Trophy finals countdown: Just three days from the semi-finals – all to be livestreamed by News Corp – the best new faces of 2021

News Corp will be there to livestream the action via www.couriermail.com.au, the Gold Coast Bulletin and News affiliates.

It has been a bumper season featuring an exciting array of new faces.

Today we feature the competition’s best New Faces of 2021.

Every team needs a Jay Blazek. The Coombabah SHS middle forward worker started the season as just another face in the off-season training squad, but he blossomed the more the competition unfolded.

Indeed the rookie who nominates Roosters pair Clive Radley and James Tedesco as his role models improved to such a degree, he played first grade with his junior club the Helensvale Hornets. “I didn’t think I would reach A-grade level this quick. The game against men is much more aggressive and fast,’’ he said.

Blazek said Coombabah’s return to the Langer Trophy highlighted to fellow students they did not have to leave their community to play in the elite schoolboy competition.

“I had my mates and the same coaches around me and it also helped the team as we had such a good culture at Coombabah,’’ Blazek said.

The Warwick-born, Texas-raised forward has stepped up to the mark for St Mary’s, despite being just 16 years old. He scored a barnstorming try against Mabel Park, and Jahnke praised the attitude Schwenke has brought to the team.

“He brings an enthusiasm and willingness to learn,” Jahnke said.

“Harrison is keen to engage in the process and he works hard.

He’s still a lean front rower, but he’s working hard to improve his gym work and all that.

“He’s not afraid to take blokes on defensively and reminds me a bit of Thomas Flegler.

Speed demon Lui entered the season on the front foot having helped Tweed Seagulls win the Meninga Cup state wide competition in May.

A capable fullback, he has found a home on the wing in the top flight competition where his pace gives Keebra Park SHS enormous threat from any position on the field.

Lui has had to work for his place, having earned his stripes coming through the Titans Cup premiership winning side of 2020 before earning promotion in the Langer Trophy for 2021.

Kini gets another mention this season after making the Surprise Packets of 2021 story earlier in the month.

A year 11 student signed by the Gold Coast Titans, he is a schoolboy prodigy who has shone in the New Zealand system before moving to PBC SHS to complete the final two years of his schooling.

His strong carries and footwork makes him a handful, both entering the attack from the back or hunting around his halves in the middle of the ruck.

But he can also ball play, which adds to his arsenal. Kini has been a great discovery and a shrewd addition to the high profile PBC SHS program.

He is also a winner, having helped Tweed Seagulls to the Meninga Cup state final.

The 196cm tall, 114kg Stowers is big and strong and he has used that asset to the best of his ability in his Langer Trophy debut season.

From a rugby union background, Stowers learned his craft while at the Ipswich Jets in 2020 but his game has gone to another level this season. A big bloke who craves the physical confrontation, Stowers was given a simple message at Marsden – run hard and play the ball quickly.

He would not be a dummy runner, he would be a primary runner and he has filled that role to perfection.

Indeed he twice scored close to the line tries from seemingly impossible positions – including against the heralded PBC SHS defensive line.

Signed by the Gold Coast Titans, Stowers has fresh legs for the code and his development over the next three years will be fascinating to monitor.

“He has been new and he is young and he has played excellent football,’’ Bretherton said.

“He has been one of our better forwards consistently across the whole season.

“He has competed very well and he’s new to this level.’’

Bagon, who has just turned 16, has been one of Ipswich State High’s most determined performers.

“He gives us a bit of physicality and grit,’’ the coach said.

“He just wants to get in and do the dirty work and throw his body around and be physical … and the guys get energy from that.’’

Bagon was initially seen by Manly as a Walters Cup player at Forest Lake SHS. Tall and lean, Te Kura is one of the elite young players of the Langer Trophy.

A left edge backrower, the Brisbane Broncos signed forward had a disrupted pre-season and late start to the competition after recovering from injury. But he impressed in every outing, including scoring two tries to rally his side from an 18-nil deficit against Keebra Park.

A Norths’ Devils Meninga Cup player, Te Kura was named in the Queensland schoolboys 16-18 years team merit side after helping the Wavell-laden Metro North to the state championship earlier in the year.

Timms was the glue of the Wavell SHS pack.

Timms is the type of player every successful side needs.

A 2019 Queensland under 15 teammate of Langer teammates Junior Taungatua and Tahrell Feaveai, Timms was also one of the Redcliffe Dolphins’ best players in a frustrating Meninga Cup campaign earlier in the year.

Arama Hau has been a tremendous asset to Keebra Park SHS, with his powerful running and deceptive footwork at the defensive line.

A South Coast representative, he is a Coombabah SHS junior who shone in age group competitions before switching to Keebra Park where he chased his dream of playing in the Langer Trophy – understandably not knowing Coombabah would be promoted to Langer status in 2021.

He is capable of scoring close to the line tries if opposition forwards do not get well balanced and commit aggressively in defence, and it is little wonder the Gold Coast Titans have identified him. Gould-Waiariki rose to the occasion for Coombabah SHS when they lost their leader and No.1 player, Tim Sielaff-Burns, early in the season.

A gun touch football player, Gould-Waiariki is a Burleigh Bears junior who scored the match winning try when the Bears upset state champions Tweed Seagulls in the Meninga Cup competition.

Nona has been a class act for Palm Beach Currumbin, initially starting the season at dummy half when the injured Oskar Bryant was unavailable, and then as a back-up halve.

Indeed the most celebrated combination in the Langer Trophy competition is the Bryant-Tom Weaver, hooker-halfback pairing, but PBC SHS never lost a beat with Nona starting in place of the unavailable Bryant.

He served his apprentice in Walters Cup last season where, playing No.9, he was a driving force in PBC’s success, and has now doubt been inspired by the professional, winning culture within the Langer Trophy group. Mabel Park SHS were the babies of the Langer Trophy and within thet nursery Mabel Park had the best 15-year-old in the competition.

Prop Alex Leapai junior played with maturity beyond his years in a team which played its heart out, without victory.

Tall and imposing, Leapai led the way in the middle of the ruck and it is little wonder the Sydney Roosters have signed him.

Leapai has an iron-willed work ethic.

He grew up watching his boxing father train in a home gym, and will never forget the off-seasons when his uncle, Queensland great Josh Papalii, would train with his dad as he tried to get an edge over fellow Raiders’ squad members.

Leapai junior loves his boxing but wants to play in the NRL – both for himself and for his dad.

Jardyn Stilinovich-Watene has been slightly underrated for his contribution, but not by his teammates.

Indeed some of his best work is never seen by spectators and our online subscribers.

“He likes to talk and having him as my half, he directs you where to go wherever you are on the field,’’ said Marsden SHS backrower Jieye Mauai.

The cousin of NRL star Dallin, Stilinovich-Watene came to Logan to live after playing reserves with Keebra Park SHS.

But he has been a quiet achiever and never lost his way despite losing his dominant halfback, Cassius Cowley, for a long period.