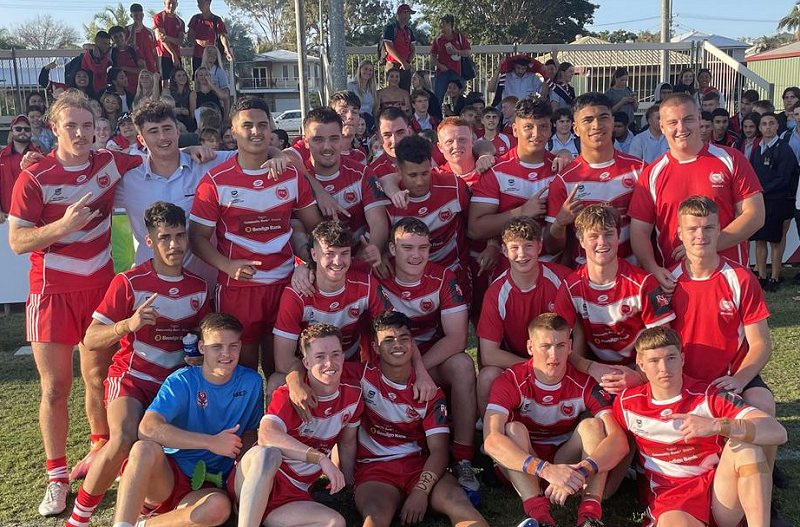 Palm Beach Currumbin came from behind to beat Marsden in the grand final of the NRL Schoolboys Cup at Kougari Oval on Wednesday. WATCH ALL THE DAY’S REPLAYS!

A triple treat of schoolboy grand final action was livestreamed this afternoon by News Corp as part of a feast of schoolboy finals this month.

SCROLL DOWN TO WATCH ALL THE DAY’S REPLAYS

Roberts, the brother of NRL speed demon James Roberts, snared stolen ball and ran for his life, finding the energy to palm off a Marsden defender and score the try of his young life. PBC won 22-18.

“I was hoping he was going to be able to get there. I saw Leon (Marsden fullback Leon Te Hau) and a few chasers, but I forgot he (Roberts) had that sick left hand fend and he got rid of him,’’ said PBC SHS captain Tom Weaver.

“When he scored it was an awesome feeling.’’ The man of the moment, Roberts added: “I just picked it up and it (a gap) opened up and I just ran. I was going to pass it but just backed myself and ran the field.’’

It was remarkable as the perennial south east champions Palm Beach Currumbin SHS climbed off the canvas to win over a Marsden side full of character.

With left edge forward warrior Ryan Foran at the peak of his powers when his team needed him most, PBC SHS recovered from 12-nil and 18-8 deficits to find their way to the winners post – again.

Foran scored two close to the line tries down the left side, the second of which raised his team to 18-all.

In a dramatic finish Then came Roberts match winning run four minutes from the end, raising his team to the lead for the first time in the game.

Even then Marsden had one play after the fulltime siren, but PBC SHS survived.

Earlier Roberts scored a try and produced a try assist against a Marsden SHS side that played their hearts out. Man of the moment Michael Roberts.

“That was a really tough game,’’ said PBC coach Tim Maccan. “We are busted. We lost two players during the game and that was just a dead set battering. They threw everything at us.’’

Marsden SHS coach Matt Hartigan praised his team’s character and said they should be proud of their efforts, while also congratulating PBC SHS.

“It is always hard to put into words the feelings that are associated with a game like that, but I was so proud of my Marsden team,’’ Hartigan said. “They showed amazing qualities across the 60 minutes.

“We had our chances to ice the game and no doube we have learnt some invaluable lessons that they will take on their journey.’’ 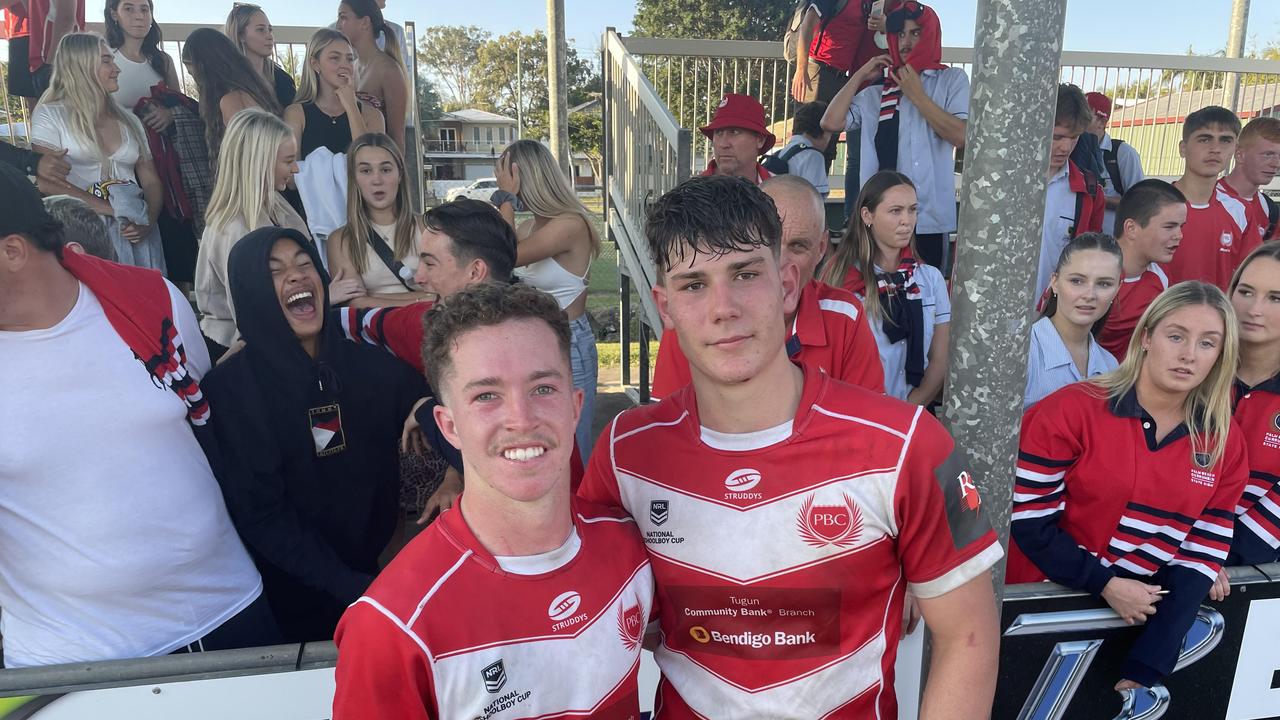 With Marsden SHS halfback Cassius Cowley rising to the occasion, Marsden SHS extended its lead seven minutes into the second half by 16-8 after a set play try which saw centre Teapo Stoltman use his pace cutting back on the inside off Cowley.

But PBC SHS were back in business when Foran scored the first of his two tries, and then another 14 minutes from fulltime.

It was a see-sawing match which saw Marsden led 12-nil and 18-8 before PBC closed in, with Foran brute force left edge running causing trouble.

Leading up to halftime Palm Beach Currumbin SHS fullback Kini Keano and five-eight Roberts lit up Kougari Oval with some dynamic play to spark their team from a 12-nil deficit.

Against a 12 man defensive line following an earlier sin-binning, Roberts scored one try and put his winger Jett Forbes over for another to bring the score to 12-8 at halftime.

It was a half of two halves.

Marsden had all the running in the first part of the game, and in the second – and not helped with Mou Taumaletila being in the sin-bin – PBC SHS dominated the period leading to halftime. Keano was brilliant against a 13-man defensive line, and even more dangerous against 12 defenders as halfback Weaver enjoyed front football ball courtesy of his pack.

PBC SHS, clearly attacking Marsden’s middle with inside passes, had some success in gathering momentum, and off that momentum Weaver’s running players Keano and Roberts were dangerous. Earlier, Marsden SHS drew first blood through dummy half Bowman who, for the second final in succession, dived over from dummy half.

Prop Xavier Stowers had run a decoy for his fellow front rower Lance Fualema, but his quick play the ball when tackled enabled Bowman to plunge over unopposed.

Marsden gained further momentum when Cowley got through the front line and won a penalty for his side after skip Chris Faagutu had got his team onto the front foot. From the new set of six big Fualema, denied a few minutes earlier, scored and it was 12-niL.

When PBC SHS ventured inside Marsden’s quarter line, Faagutu put his shoulder to the grindstone to put a big tackle on PBC SHS’s Bailey Martin.

Marsden SHS Cowley was up for the big dance, playing straight, offering passes either side of him and kicking with precision.

Mabel Park defended stoutly into the second half, but a show and go by Caloundra halfback Tully McLellan got Caloundra on the board again and it was 30-nil.

Caloundra SHS could not have started better. They led 12-nil and then 18-nil when No.7 McLellan showed a clean par of heels running down the right hand sideline.

And it was 22-nil when McLellan ball-played beautifully at the line, taking a hit but getting a pass away to a rampaging Brodie Halpin whose long stride carried him 30m to score.

Off the back of quick play the balls, Caloundra rolled forward at pace, with an uptempo game unsettling the Mabel Park SHS defence early. Michael De Vere, whom the competition is named after, with Caloundra captain Jack Philip

Caloundra SHS lock Hayden Gallagher was the picture of determination when he twisted and turned and plunged over to score the opening try next to the posts.

Next the explosive speed of fullback Brooklenn Mundraby-Grogan was on show when he finished a wide, right hand raid, handing Caloundra a 12-nil lead. Caloundra SHS halfback and man of the match Tully McLellan with Matt Gillett.

The best side all season, Redcliffe SHS, deservedly finished with the silverware at Kougari Oval today.

Redcliffe beat Clairvaux MacKillop College 46-nil, roaring out of the blocks to lead 26-nil before going on with the job.

but there was no way they were going to lose today’s decider. Hooker Jack Cameron delivered slick passing off the back of quick play the balls, while out wide centre Tom Lunney and Dan Dawes enjoyed first half tries.

The Redclfife forwards were big and mobile, with Braith Major, Kiahl Moore and Taulani punching out the metres while also being line breaking threats. Earlier, the two Redcliffe props combined beautifully to open the scoring in the Gee Cup grand final, with Sefo unloading to Bennett who stormed over beneath the posts after six minutes.

It was 10-nil not long after when five-eight Blake Kehl threw a lovely long ball to his winger Dan Dawes who scurried over in the corner.

In between Clairvaux winger James Richardson threatened with a sideline run, but Kehl in cover and Redcliffe fullback Tyler Fishlock were up to the task in defence. Next week we feature the Broncos Challenge grand finals, and in two weeks, the Phil Hall state championship.

Enjoy livestream of the finals and replays at www.couriermail.com.au, the Gold Coast Bulletin and News’ affiliates while unlocking access to the best news site across Australia.