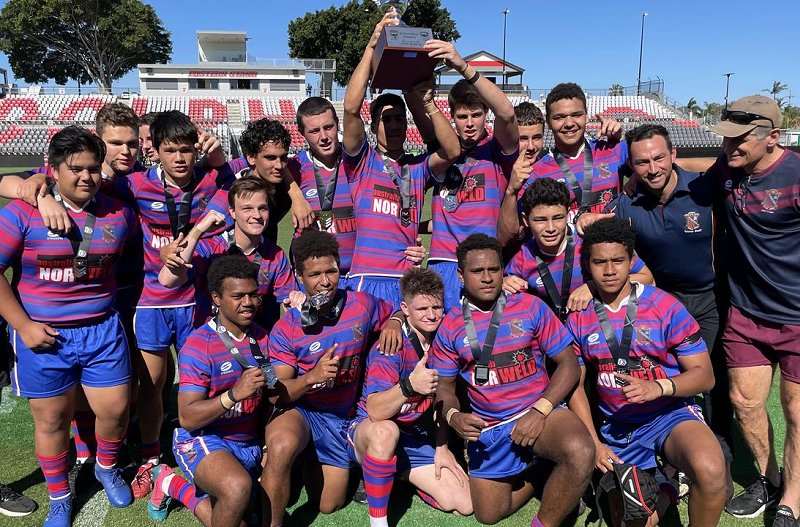 Watch a replay of St Augustines Vs Lockyer District.

A booming sideline conversion by Billy Vincent – his second of the game – then carried his team ahead.

St Augustine’s College came from behind to win the trophy.

Lockyer Valley had led but Caiban Thaiday’s second try, then Magill’s try and Vincent’s conversion gave the FNQ side victory.

St Augustine’s College coach Chris O’Farrell said he was most proud of his team’s resilience throughout the season.

“And their determination to stay in the fight.

“They were their worst enemies pretty much the whole game but they dug deep in the last few minutes. They have shown that all throughout the season.’’

What a match it was.

Earlier, Lockyer Valley SHS seized the advantage – but only just – with a composed, constructive first half of football.

Enterprising centre Shoneton Karapen snapped a 4-all deadlock in the lead up to the break, outflanking the St Augustine’s defence which had given up a little too much room on the outside.

Both No.4s traded tries in the opening 20 minutes of the grand final, with Hayden Dunn plunging over in the corner for Lockyer Valley after subtle ball play by Cooper Listen and Mason Potter in the lead-up.

Lockyer Valley had the better of the territory battle, with a fast moving defensive line contributing to keep St Augustine’s pinned.

But the first chance St Augustine’s had in attack zone, they scored, with right centre Kaleb Eaton crossing.

Late in the first half Dunn almost scored again, but was bent back by last ditch goal line defence.