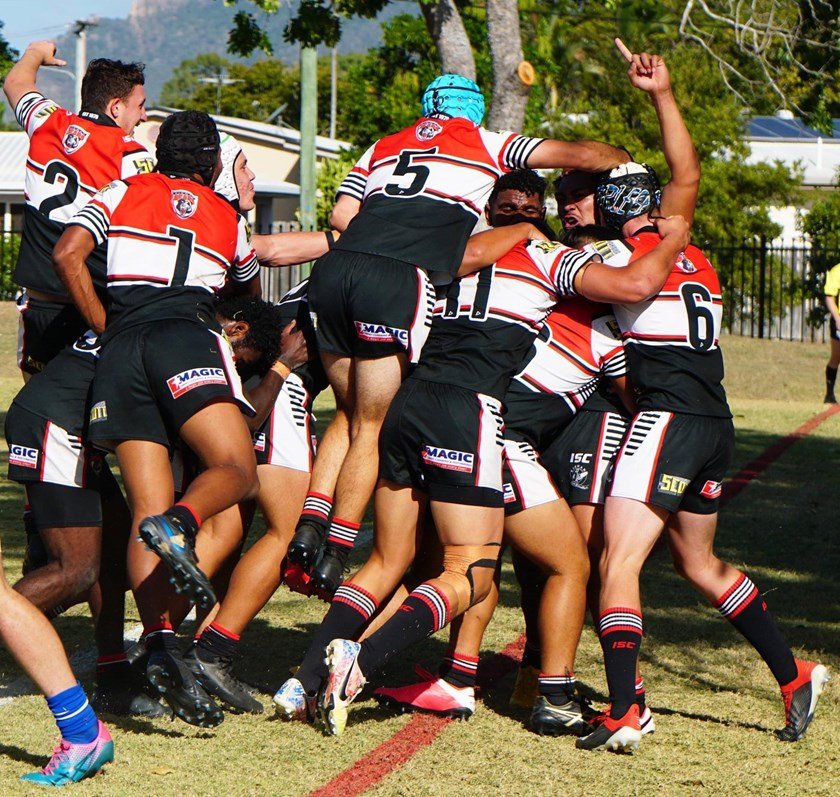 There were scenes of absolute jubilation in Townsville yesterday as Kirwan State High School kept out a resurgent Palm Beach Currumbin in the frantic final minutes to claim back-to-back Phil Hall Cup titles.

The win is the Bears’ third Queensland crown after first lifting the silverware in 2015, and then again last year – both times also going on to win the National Schoolboy Cup.

“The win means a lot for our school and we saw that yesterday,” said coach Todd Wilson.

“We were lucky enough to get our Year 12 students down there to support us under the COVIDSafe guidelines and even 45 minutes after the match, there were still people celebrating the win.

“It was a real community feel… the boys feel a really strong connection to the community and feel really proud to be able to do what they do for our school.

The Aaron Payne Cup champions were first to strike five minutes into the contest with fullback Ragarive Wavik scooting from dummy-half after a number of attacking raids from regulation No. 9 Tyreice Baira-Gela.

The Bears went in again five minutes later, with Abai Chatfield-Mooka running wide and crashing over on the left edge to take an early 12-0 lead.

Palm Beach were quick to hit back through a Ryan Rivett special – the five-eighth timing a nicely-perfected grubber for Brock Priestley to regather and score underneath the posts, putting the Reds back into the contest in the 15th minute.

As the windy conditions led to a number of errors from both sides in the opening half, consecutive piggyback penalties helped Chatfield-Mooka cross the chalk for the second time in the half, but was denied by a forward pass.

To rub salt into the wounds, the Reds got to work to make Kirwan pay; with prop-forward Xavier Willison motoring up the field – earning a quick play-the-ball – allowing Rivett to get his hands on the footy early at first receiver before delivering a short-ball to Priestley, who ran a textbook line to bust through and celebrate his second four-pointer.

At half-time, the home side had their noses in front by a smidgen, up 12-10, but the Reds got off to the worst possible start in the second 30, kicking the ball out on the full, giving the Bears all the ascendancy.

With Kirwan attacking mostly towards the left in the first half, it was time for their deadly right edge to kick into gear – containing potent Michael Morgan medallist, Jeremiah Nanai.

The visitors had looked to defend their early faux pas until Nanai created something out of nothing with some fancy, late footwork on the line to barge over for his first.

The inspirational back-rower was in again minutes later, as five-eighth Harley Taylor grubber-kicked early in the tackle count for Nanai to chase and deliver – much like Priestley did in the exact same spot on the field in the first half.

A costly fifth-tackle penalty was awarded to Kirwan when Oscar Bryant dived into the ruck on the line, and Taylor added the extra two points to put the lead beyond two converted tries with 13 to go.

Many thought that was the ball game, but Palm Beach didn’t travel the 1400 kilometres to waive the white flag.

With the game on the line, Bryant more than made up for the penalty with seven minutes remaining, running a perfect ‘J line’ out of dummy-half to crash over right next to the left upright.

Trailing 24-16 in the final minute, the crafty spine got to work with a desperation shift of the ball near the line, coming up trumps when Tom Weaver sold a dummy to stroll over untouched.

With time against the young half, he missed the kick in a rush – but wasn’t too concerned knowing he needed to conserve as many seconds as possible.

40 seconds on the clock… the Reds had to work off the back fence and chance their hand with a Hail Mary play.

In the now-or-never moment, Weaver threw a pinpoint ball to speedster Troy Duckett on the wing, but the Bears were able to muscle up and force the flyer into touch on the siren, sending the Bears supporters into hysteria as the school claimed back-to-back schoolboy titles.

Wilson was super proud of his side’s effort.

“They played some good footy and were pretty good defensively for most of it,” the back-to-back title-winning coach said.

“They just had to hang in there at the end and I couldn’t have asked for much more out of them.”

The Bears coach was particularly impressed with props Chatfield-Mooka and Cruz Smith.

“The two starting front rowers were exceptional and I thought they both carried the ball really well,” said Wilson.

“They were really good together defensively.

“That’s where I thought the game would be won or lost and I sort of think it was yesterday.”

It was undisputed the match was a great finish to the Queensland schoolboy season.

“I think we saw the best of both the Aaron Payne Cup and the Allan Langer Trophy yesterday and it was a great game of schoolboy footy,” Wilson said.

“I’m looking forward to just sitting down and just watching it from a spectator’s point of view to just enjoy it over the holidays as a game of footy.

“It was certainly a high quality game from two really good schools.”