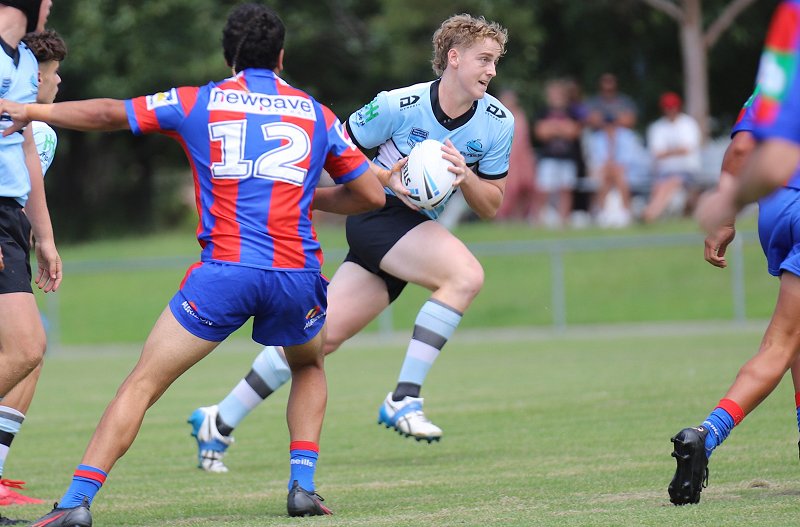 The Cronulla Sharks Junior Representative teams travelled to St. John’s Oval at Charlestown on Saturday for their final hit-out before the 2022 season kicks off.

The Harold Matthews Cup team were the first to take the field against their Newcastle opponents.

Head coach, Brad Kelly, ensured fair rotation of his player’s, providing all 38 squad members with the opportunity to make one last impression prior to round one team selection.

Despite a hard-fought battle from a determined Shark’s squad, the Harold Matts team were defeated in the final minutes of the game, following two quick Newcastle tries that saw the home team takeout the match six tries to four.

Sharks Development and Pathways Manager, Glenn Brailey, expressed no concern surrounding the result and was impressed with the efforts demonstrated by the U17’s squad.

“Harold Matts came out strong in the first period matching it with a bigger Knights team,” Brailey said.

“The entire squad competed really well going try for try over the entire three periods of play, which was very pleasing.”

Cronulla’s SG Ball squad were the next to take the field against a strong Knight’s roster.

The Shark’s started the game well, presenting good attacking shape, however, with several key players missing and a pre-season plagued with disruptions, Cronulla was dominated by their Newcastle opponents.

“With HSC exams, schoolies, socials and COVID it has been a tough pre-season for our boys and the lack of quality time together unfortunately showed,” Brailey said.

“The team will pull together in time for Round 1, especially with key players returning.”

The club’s U19’s Women’s Tarsha Gale Cup squad played a three-way trial against the Newcastle Knights and the South Sydney Rabbitohs, in the final matches of the day.

The girls showed promise for the upcoming season in their first match-up, defeating their South’s opponent’s four tries to two.

However, their second match of the day proved to be a more difficult contest, with the Newcastle Knights presenting a greater challenge to the young Shark’s side.

“Our girls did a great job against the mighty Rabbits but found things a little tougher against a strong Knight’s outfit,” Brailey said.

“Our players will all take something out of these trials and I’m sure the coaches will have their player’s ready for Round 1.”

The 2022 NSWRL Junior Representative season is scheduled to commence on Saturday 5th February, with all Shark’s teams set to kick off their respective campaigns at PointsBet Stadium.

Sharks vs Steelers – February 5, 10am at PointsBet Stadium