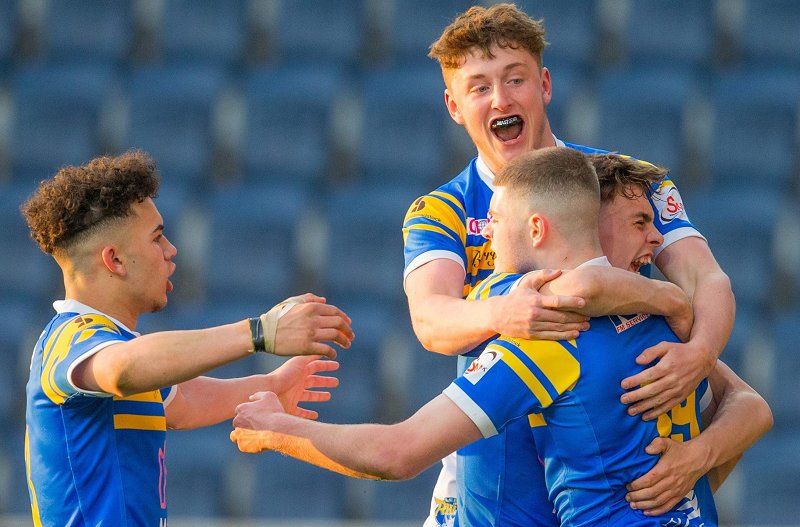 Leeds Rhinos Under-16s claimed their first win of 2022 in a dramatic style as Mark Butterill’s side beat Bradford Bulls Under-16s 60-0 at Headingley Stadium.

Anticipated to be a tough test, both sides came out firing in the opening minutes.

Leeds combatted ferocious Bulls attack with clever kicks in behind to pin the visitors close to their goal line and soon, their game plan started to come into fruition.

Fifteen minutes in, a poor kick away by Jack Ward was taken on the full by Harry Taylor and Leeds sensed an opportunity.

A further strip on David Benson earned the home side a set of six on the Bulls’ try line and after Fergus McCormack was pulled up short, a poor pass from Benson bounced up at the right moment for Presley Cassell to catch it and charge over.

Bradford put up their defences and also followed Leeds’ attack up with a number of opportunities for points, all of which were squandered.

The Rhinos on the other hand benefitted from their opponent’s mistakes.

A head high tackle on Kai Taylor-Smith as he was on the break resulted in just a penalty for Leeds and after they moved within Bradford’s 20 metre area.

McCormack used some great footwork to dance his way through and score under the posts.

Inside the last ten minutes, the Rhinos added to their lead to take a convincing advantage into half time.

A break by Taylor, who cut deep through the heart of the Bulls’ defence, saw the winger score one of the tries of the evening in the corner.

Before Callum Webster took a good drop off from Harry Smith to race away and touch down. Taylor-Smith finished the half with three conversions to make the score 22-0.

The second half was a walkover by the young Rhinos, who ran 40 points passed the Bulls.

Sub Elliott Fox got the second half scoring underway – the hooker making a clean break from dummy half before using his momentum to ground the ball.

The turning point in the game came when Bradford prop Cobie Wainhouse was sent to the sin bin for a professional foul on Taylor-Smith.

With the wind in their sails, Leeds added to their score line. Toby Marshall, another making his debut for the Scholarship, crashed over from a short pass, before Jacob Stead followed suit; the second rower finishing off after Fox had got a great offload away.

Errors and injuries started to creep in for both sides with the score at 36-0 but once again, Leeds produced some of their best rugby to open up the Bulls’ edges.

A great pass from Fox, who had a stand out second half, allowed Joe Diskin to break away and he did well to beat full back George Rayner to the line.

Captain Lloyd McEwan-Peters, who led from the front, added his name to a growing list of scorers with ten minutes to go and the scoring didn’t stop there.

A break by Cassell was followed up by prop Bobby Hartley, who took it all the way to the house, and then Webster rounded off the try scoring as he supported a break involving Taylor-Smith and Smith to make the final score 60-0.

Rhinos U16s To Play At Headingley This Wednesday