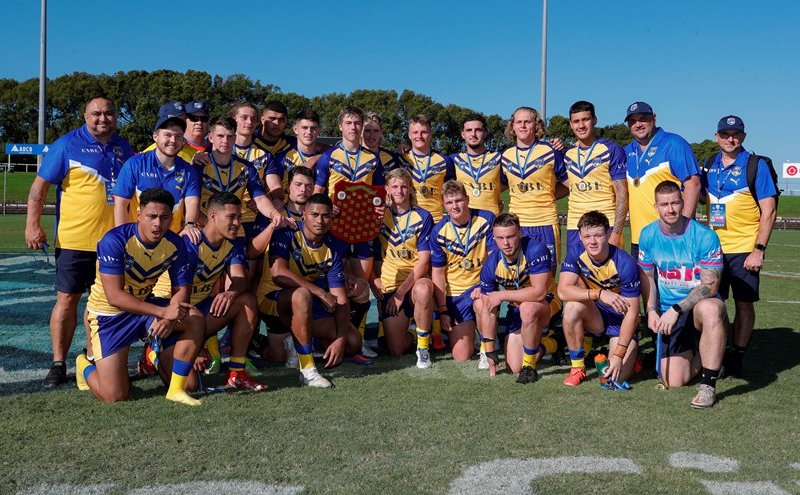 City turn in clinical first half for Under 18s win

City have scored a convincing 42-18 win over Country in the Under 18s match at 4 Pines Parks in Brookvale after a clinical first-half performance where they scored five unanswered tries.

City back-rower Harrison Hassett was named Player of the Match after a strong performance which saw him have a hand in a couple of tries, while halfback Ethan Sanders was just as impressive after playing a starring role in attack.

City coach Stephen O’Dea was impressed with the first-half performance from his players but added they had learned a valuable lesson in the second half when Country rallied.

“I said to the boys at half-time that we wanted to be professional and repeat what we did in the first half and I felt we probably weren’t that great in the second half,” O’Dea said.

“If they want to go forward as footballers, which is what they aspire to do, they’re going to have to learn that and be better in that respect.

“We were proud of our first-half effort, and it really set the tone for the game, but was probably just a little bit disappointed that we didn’t go on with the job.”

City got off to a strong start after halfback Ethan Sanders put Lajuan Vito into a hole; the back-rower palming off the goal-line defence to crash his way over the line. That triggered a rush of tries for the blue and gold team.

Centre Charlie Guymer finished off a long-range break out wide and Ferguson converted to make the score 12-0.

Sanders then put a kick across field which was knocked back by winger Jordi Mazzone to back-rower Harrison Harrett who managed to get a pass away for Ethan Strange to score.

Ferguson had no issues with the kick to extend the lead to 18-0.

The City halfback stepped up again when he sparked a break for fullback Fletcher Sharpe who in turn passed a ball back inside for Sanders to race away and score underneath the posts.

Ferguson continued his perfect day with the boot after landing another conversion for a 24-0 lead.

City completed the first-half rout when Jordan Miller did well to barge his way through the defence before slipping a pass for Samuel McCullough, who in turn sent Sanders over in the corner.

Ferguson had no issue with the sideline conversion to make it 30-0 at half-time.

Country rallied in the second half with a quick ball putting Country captain Thomas Fisher into a gap before he found fullback Wesley Pring in support.

Five-eighth Shane Davis-Caldwell landed the conversion to put his team on the board at 30-6.

Country hooker Kyan Hjaltason then showed plenty of skill to fool the City defence with a couple of show and go’s on his way to scoring next to the posts.

Davis-Caldwell landed the conversion again and Country were on their way to making a game of it at 30-12.

That snapped City back into life and Sanders got involved again to fire a cut-out pass for centre Josh Feledy to score.

The City halfback then put up a bomb which was grabbed by Hassett before he found Mazzone on his outside to score.

Ferguson landed both conversions to extend the lead to 42-12 and although Country would find one more try the day well and truly belonged to City.