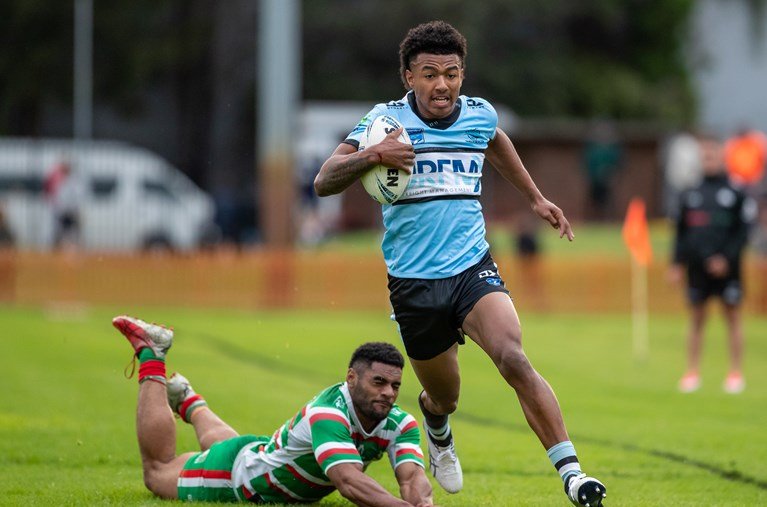 Cronulla Sharks U17s Harold Matthews Cup and U19s SG Ball teams went head-to-head against the South Sydney Rabbitohs at Mascot Oval last Friday night, in the first trial game for both squads ahead of the 2022 season.

The Harold Matthew’s team kicked the night off and while a number of players were rested, the remaining team members were given the opportunity to showcase their talent and prove their place in the final squad.

For many, including two Queensland recruits Lama Afu and Siosifa Kava, this was their first experience playing in the Sharks colours at a Junior Representative level.

The trial match provided coach Brad Kelly, with an insight into the ability of individual players, as well as the strength of his squad across the park.

“A lot of those boys I haven’t seen play before,” he said. “It was good to see them play for the first time and to get a look at them on the field and in different positions to back up what I’ve seen at training.,” Kelly said.

“Between Glenn (Brailey) and myself, we can sit down and nut out the squad moving forward. I think that’s a good opportunity to justify a few thoughts already. We have got a few surprise packets in there as well.”

Up against a big South’s side, the Sharks team were unable to capitalize on the attacking opportunities that arose and were held scoreless, however the score line was not a concern for Kelly who placed more importance on the effort demonstrated by his players.

“Tonight the fundamentals were the main killer for us. We had a lot of errors on the first tackle, errors in the play the ball, just little things like that which we have made a focus of our training every session,” Kelly explained.

“We didn’t execute those basic things like playing the ball and not pushing passes. I was a bit disappointed with that but there were little glimpses of good play and then there were other periods where it got a bit scrappy.”

With the remaining players set to rejoin the rest of the squad for the next trial game, Kelly is confident that depth throughout the team will not be an issue.

“I think there’s a good balance there for sure. There’s definitely enough talent there to fill out a team,” he said.

Koby Douglas was too strong for his opponents and was next to put points on the board for Cronulla.

Despite Cronulla efforts, South’s had the final say, scoring late in the game’s last quarter.

Dave Howlett was impressed by his squad’s effort and their application of skills from the training paddock to the field.

“I was really happy with what they did, everything that we worked on at training the boys applied in the game,” he said.

“As far as execution they weren’t perfect, but there’s still a lot of time for us to work on those things.

We have been working really hard on all of our core skills and positional type stuff. I was really happy with what they did in that regard.

“For the small number of boys that played tonight, I think they handled the pace of the game well and finished the game strongly, which is a good sign that we have been training hard,” Howlett added.

Howlett also made the decision to rest a number of the team’s key players, providing a greater opportunity to the boys transitioning from Harold Matthew’s Cup into the SG Ball competition this year.

Along with a handful of the Sharks U18’s Development Squad members who stepped up to play.

“We rested quite a few boys. There were some other boys that I have been happy with the way that they have been progressing and I am holding them off for later,” he explained.

“It was a real opportunity for some of the boys from Harold Matts last year to get some game time and get a taste of SG Ball and show what they could do. I think they handled the jump up really well.”

With the next trial game scheduled for mid-January and the season set to kick off in February, Howlett will shift his focus from conditioning, skill and positional training to the development of the team as a whole.

“We will work on a lot of team-based stuff starting next week. When we come back after Christmas.

We don’t have a lot of time, so it will be less time on the conditioning and more on preparing the team for how to play. That will be a big focus for us after Christmas getting ready for Round 1,” Howlett said.