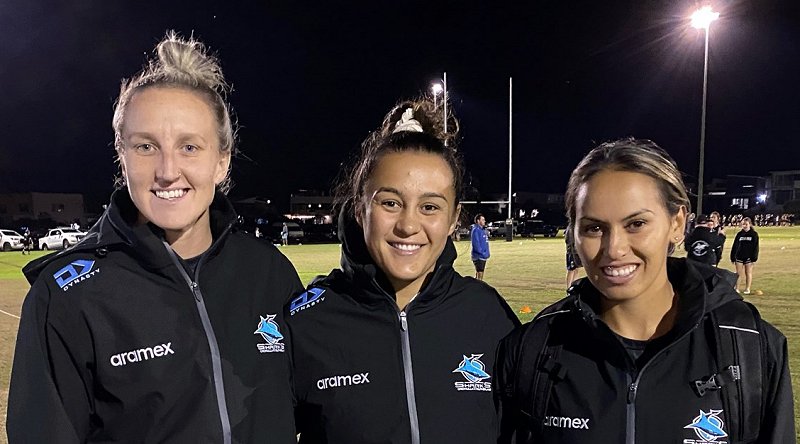 In continuing to nurture and develop young female rugby league talent, the Sharks have secured the services of three of their most senior players as coaches for their under 17’s team.

To be held on Wednesday, July 6 at the St Mary’s Leagues Stadium, the Under-17’s Lisa Fiaola Cup will enhance the Sharks female pathway to the Tarsha Gale, Harvey Norman and potentially to the NRLW team.

If successful in their recent application, by identifying talented local players and offering them an elite level playing opportunity.

The team will train and prepare under the guidance of three accomplished and respected women’s players.

With Baxter, a Jillaroo and NSW Blue, Kiwi international Takairangi, already partnered up with Baxter in a junior coaching business, assisted by another Jillaroo and new Shark in 2022 in Wheeler, and the young Sharks girls are in good hands.

Baxter was looking forward to playing her part in guiding the next crop of young female players.

“It’s a good intro with the Gala Day, then next year it might turn into a full 17’s competition which would be exciting,” Baxter said.

While the Sharks are eagerly awaiting the outcome of their application to be a part of the 2023 NRLW competition, their continued efforts to offer pathways and playing opportunity to young female athletes.

Is another display of the clubs’ commitment to growing the women’s game.

“NRLW is the goal, hopefully we can get that license, but I’ve felt we’ve always had a good pool of young girls that play league tag and touch footy and Oztag.

But to have a full contact competition for that younger age I think is going to be great for their development,” Baxter continued.

“I’m excited to see some of the young girls coming through, especially in the Cronulla area. They can start playing at a more elite level at a younger age which will be great,” she added.

The Sharks Lisa Fiaola Cup squad will do four weeks of training leading up to the Gala Day, with players turning 16 or 17 and registered with a club in the local Cronulla-Sutherland junior league, eligible to participate.

The Sharks will assemble a squad of 25 players.