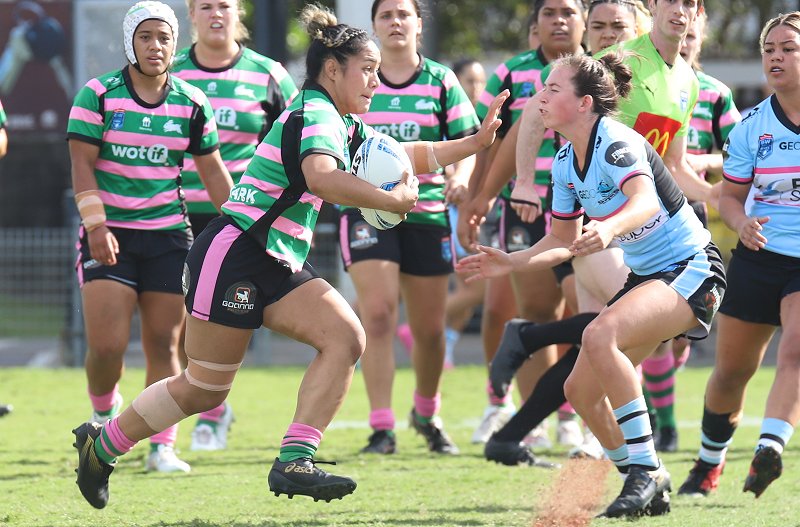 The South Sydney Rabbitohs continue to build their female pathways squads with the announcement of some key signings and re-signings in the Harvey Norman NSW Women’s Premiership pre-season squad, the announcement of the 2022 Tarsha Gale Cup under 19s women’s pre-season squad as well as the Head Coaches for the Harvey Norman NSW Women’s Premiership, Tarsha Gale Cup and Lisa Fiaola Cup under 17s teams.

The Rabbitohs will also increase female participation in their Black Rabbits elite player development squad from three players to eight in 2022.

Rabbitohs Head of Elite Pathways and Player Development, Joe O’Callaghan, is excited to see the female squads coming together.

“This is by far the biggest investment we’ve made in women’s Rugby League so far at our Club as we build our pathways with a view to fielding an NRLW team in the not-too-distant future,” Mr O’Callaghan said.

“The interest in playing for the Rabbitohs in all three tiers of female teams has been overwhelming and we’re delighted to see so many women and girls wanting to represent our great club.

“Fielding three teams representing the Rabbitohs for the first time is exciting, but equally so is our commitment to hosting eight female players in our Black Rabbitohs elite player development squad in 2022.

“These players will have the opportunity to train with the elite young men’s players as well as NRL coaches and players throughout the season and we saw the benefits of this squad last year for the female and male players.

“We all really looking forward to the addition of the two extra teams to the Club in 2022 and young girls and boys playing junior football in the Souths Juniors competitions can see a clear pathway to the elite levels of the game. Everyone can now dream of, and work hard towards, becoming a South Sydney Rabbitoh.”

The Rabbitohs Harvey Norman NSW Women’s Premiership side will be led by experienced coach Shane Sultana, who will be assisted by Tarsha Gale Cup Head Coach Karen Stuart throughout the 2022 season.

The Rabbitohs have re-signed a number of key players from last year’s squad including:

Ellie Johnston – a prop or second rower who was the Club’s player of the year in 2020, a NSW Country representative in 2021 and a member of the Parramatta Eels’ NRLW squad in 2022.

Akira Kelly – a halfback who was an Indigenous All Stars representative in 2021 and was the Rabbitohs’ leading points scorer for our Harvey Norman NSW Women’s Premiership team in 2021.

Aaliyah Fa’amausili – a lock or second rower who was part of last season’s Rabbitohs squad and who will bring the experience of two years playing with Dragons NRLW team and representative experience from the 2018 Australian Prime Minister’s XIII and 2019 NSW City teams.

Seli Mailangi – a hooker or lock that won the Rabbitohs’ player of the year award in 2021 who has also represented NSW City in 2021 and will be a member of the Parramatta Eels’ NRLW squad in 2022.

The Club has also signed some internationals to their squad in 2022 including:

Charlotte Booth – a front rower who represented England at the 2018 World Cup and in Test matches in 2019. Charlotte won two Women’s Super League titles with the Leeds Rhinos before relocating to Australia in 2021 where she played for the Brisbane Tigers in the BHP Women’s Competition.

Patricia Raikadroka – a centre with multiple years of Harvey Norman NSW Women’s Premiership experience between Mounties and the Wests Tigers. She also brings with her the experience of representing the Australian Prime Minister’s XIII in 2018 and 2019 as well as the Bulikula Fijian Women’s team in 2019. Patricia was a member of the 2020 New Zealand Warriors NRLW squad.

The pre-season squad so far for the Rabbitohs’ 2022 Harvey Norman Women’s Premiership team is:


The Rabbitohs are still looking at finalising some final spots within this pre-season squad. Anyone with relevant playing background and experience that would like to be considered, please contact pathways@rabbitohs.com.au.

The Rabbitohs’ first Tarsha Gale Cup team will be led by Head Coach Karen Stuart, who will double as the Assistant Coach of the Harvey Norman NSW Women’s Premiership team, and she will be assisted by Lisa Fiaola Cup under 17s Head Coach Shane Manning in 2022.

Stewart has extensive experience as both a coach and player, having represented Australia and Queensland as a player in Rugby League, Rugby Union and OzTag, as well as holding Rugby League coaching roles with the Australian Jillaroos, Queensland, New South Wales, Queensland Indigenous, Indigenous All Stars and junior representative teams.

The pre-season squad for the Tarsha Gale Cup team features from some familiar names for Rabbitohs Members and supporters including Kasey Taaffe, the cousin of NRL player Blake Taaffe; Yilara Widders, the daughter of former Rabbitohs player and coach Dean Widders; and Fifita Koloamatangi, the cousin of Rabbitohs first grader Keaon Koloamatangi.

The pre-season squad so far for the Tarsha Gale Cup under 19s squad is:

As with the Harvey Norman Women’s Premiership team, the Rabbitohs are still looking at finalising some final spots within this pre-season squad. Anyone with relevant playing background and experience that would like to be considered, please contact pathways@rabbitohs.com.au.

The squad for the under 17s Lisa Fiaola Cup squad for 2022 will not be announced until next year due to their competition not being played until the weekend carnival in mid-2022.

Any players interested in being part of this program, those players born in 2005 and 2006, please reach out by emailing pathways@rabbitohs.com.au.

The team will be coached by Shane Manning who will also be the Assistant Coach for the Tarsha Gale Cup under 19s squad in 2022. Shane has previously held roles with the Rabbitohs Harvey Norman NSW Women’s Premiership team as well as various assistant coaching roles with junior representative teams at South Sydney over the past eight years.