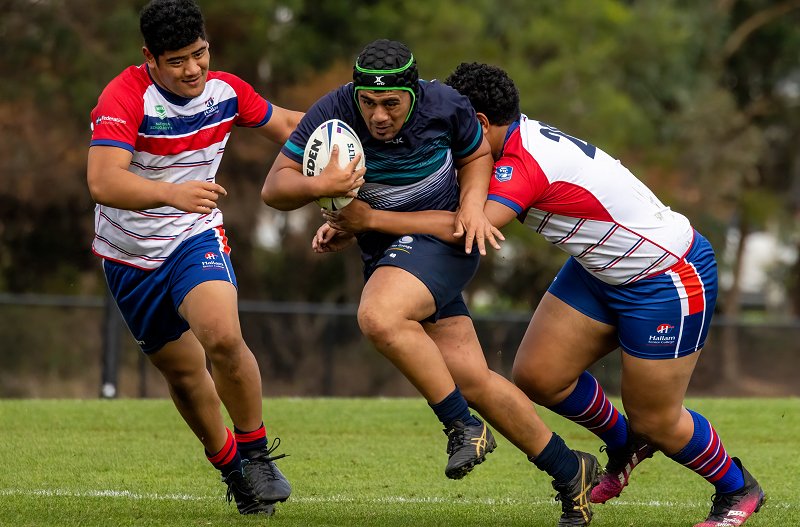 A hat-trick from Suliasi Prescott in the first 15 minutes paved the way for a big Grange win over Hallam in the NRL Schoolboys Cup qualifiers.

Relive all the action from our LIVE STREAM.

A brilliant display from star hooker Suliasi Prescott has led competition newcomers The Grange favourites to a pulsating 32-18 victory over Hallam College in Round 2 of the NRL Schoolboys Victorian qualifiers.

Prescott, who has been named in the Under-18s Australian Schoolboys train-on-squad, broke Hallam College’s heart, scoring a hat-trick in the first 15 minutes of the Victorian clash at Casey fields on Thursday.

Prescott, who is in his final year of the competition, told News Corp he was “proud of his team playing with only one sub’, with multiple squad members out with the flu.

“We were going to forfeit the game today, but we told the coach we could do it and we were in it. So we’re really happy with the win.”

“The kick and chases are just something I like doing when I see there’s no fullback, I have a little go.

“Last year we lost to Hallam and this year I thought they would be the best in the Victorian comp, so it’s really exciting.

“We would love to play in the NRL Schoolboys. It would mean a lot.” Despite Hallam’s emphatic 38-0 win against Mt Ridley in the competition opener last week, there were ominous signs for the eastern suburbs side when Prescott crossed the line for the third time with an impressive chip-kick solo try.

But Hallam College refused to lie down and roared to life in the second half on the back of some thunderous carries from their middle forwards, Storm-contracted utility Josiah Neli led from the front.

But in the end, The Grange put up a stout defensive effort, turning away a series of Hallam raids in the final few minutes and finishing with a convincing 14-point victory.

Hallam have eyes on the big prize

And they are ready to run through the competition to do it. …READ…MORE…

More in Other Footy