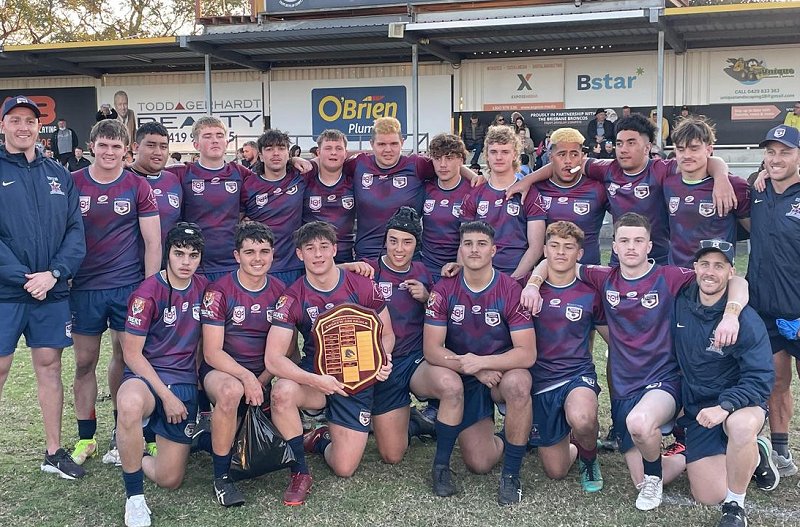 Supporters invaded the field in celebration as a new Gee Cup champion emerged on Wednesday.

Supporters invaded the field in celebration as Stretton players were swamped by their back slapping mates.

It was a fantastic match, and the roar from the Stretton camp at fulltime highlighted how much it meant to these young men.

A penalty goal by Stretton State College forward leader Corey Nassif raised the flags and presented his team with a 14-6 lead two minutes from time.

Stretton College’s dream of playing in the Langer Trophy remains alive after the win against a big-hearted St Mary’s who fought to the death in the Brisbane Broncos-sponsored competition. The Stretton State College team which won the final.

The second half was full of a series of big moments, including when when Stretton set sail for the right hand corner, looking to wrap up the match, only for St Mary’s pair Harry Eyers and Kobe Timms to scramble Stretton into touch.

Then Stretton dummy half Josh Sharp reached out to score, but he was just centimetres short on the last tackle and St Mary’s escaped. At one stage in the second half St Mary’s interchange forward Botrus Dokshen made three tackles in four as St Mary’s tried to attack with their defence. It was rugged grand final action at its best.

Stretton even tried a field goal in this period looking for a seven point buffer, but Bailey Neave’s kick was charged down by a surging wall of St Mary’s players. Two tries in three minutes saw Stretton State College sweep from behind and take a 10-4 lead into halftime.

All this after had St Mary’s opened the scoring and looked the better side for two-thirds of the first half.

Saints centre Bailey Nash crashed over, with the Clydesdales Meninga Cup representative player disappearing under a mass of bodies, but referee confidently awarded the try. It was 4-nil.

A break soon after by Alijah Duncan, and a kick to the corner from Kobe Timms, had Stretton burning more energy at the wrong end of the field. Phil Hall and Broncos champions Mick Hancock and Michael DeVere with the St Mary’s captains after the DeVere grand final.

This was further compounded when fullback Tait Cameron broke clear from the subsequent kick-return, although Stretton College did scramble and recover.

St Mary’s were having the better of the first half, with a third clean break, this time by centre Noah Rogers, but Stretton were able to limit the damage. A Bailey Neave 40-20 then provided Stretton with their best chance, but a sweeping backline movement did not find its mark.

But having had a misfire, Stretton State College finished its best passage of play with a smooth, silky try to left centre Beetham who crossed near halftime in the corner. Saints jumped out of the blocks with two first half tries and were full of running before Stretton State College staged a wonderful grand final comeback.

The match finished with Stretton hammering the St Mary’s line, only for Saints to hang on in a thriller. St Mary’s Braithen Scott was named player of the match for the DeVere grand final. Pictured with Mick Hancock.

St Mary’s College senior squad has been praised by coach Louis Reen after rebounding from the disappointment of missing this season’s Langer Trophy competition.

Saints, defeated by Mabel in the Langer playoff, has made every post a winner with a number of new faces this season.

GIRL POWER: HOW THE SCHOOLGIRLS HAD ORIGIN HEROES CHEERING WILDLY

“We were realistic at the start of the year of where we felt we were at,’’ Reen said.

“We lost a number of key players which created opportunities for some younger players to step up.

“Our job as coaches was to get the group to find confidence in themselves again and they certainly have shown that in the last month or two.

“The players also have grown together aided by a positive Confraternity experience which is important for the team dynamic and now we are ready to put our best performance in to beat a strong Stretton outfit.’’

He said the team moved “away from one dimensional power based football’’ to a more creative style of play as the season evolved.

“Our attention to detail in defensive aspects of our game has also been a key area of improvement this season.’’

An eye-catching element of Stretton’s performance in its win over Caloundra SHS was that the side came from behind in wet and slippery conditions when Caloundra seemed to have won the game.

That performance did not surprise forward leader Corey Nassif. “We turned up in attack and defence and kept following each other. “Now we have to turn up again.’’

Nor did the performance to beat Caloundra in the wet from 10-nil down surprise coach Jacks.

“The boys have always shown that type of resilience before and they finished well.’’

This week’s round of Langer fixtures includes the Clash of the Titans – Keebra Park SHS v Palm Beach Currumbin SHS. WATCH THE QSSRL LIVE WITH KOMMUNITYTV
Watch all of the action from a blockbuster Wednesday of Queensland Schoolboys rugby league.