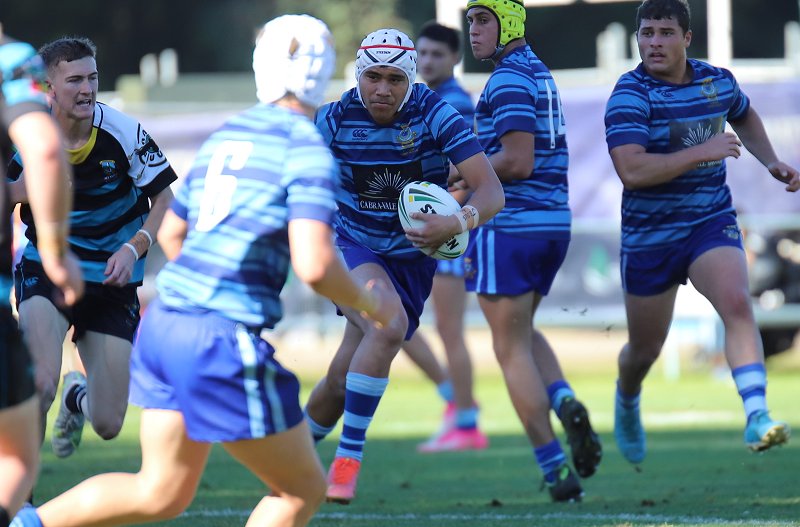 It was a reality check in Round 3 of the Schoolboy Cup Southern Confrence at New Era Stadium for All Saints College Maitland today, coming off 2 wins in their pool, the trip to Sydney this time turned into a footbal lesson for the Maitland College.

Suddenly Patrician Brothers ran the ball up the middle, through the ball out wide, the Center Terence Lafai ran 30 meters, threw a tight inside pass to a flying replacement Victor Alofaki who barged through 4 defenders to cross the line only to be just held up in goal by by some strong and determined by All Saints Connor Fortune and other defending team mates, no try

After the Drinks break, the well trained Patrician Brothers team simply reset and went to their next job, which was to complete their sets and run at the All Saints defenders

Running into the sun, Patties scored 2 more 1st half tries to lead 26 – 0 when Referee Mark Harvey blow his half time whistle.

Patrician Brothers kicked off the second half, a great catch by All Saints Fullback Taj’h sent his team into attack only to have the ball fumble out of their possession, the loose ball was pounced upon and Patties were back in business and attacked from only 40 out.

All Saints defenced their line and got the ball back due to a Patties Knock on.

All Saints run up the field and completed their first set of the game kicking deep into Patties territory.

Patrician Brothers received a penalty on the half way mark, they passed the ball wide then inside to a running Corey Ackers who run over the line the continued on to dive and put the ball down behind the posts.

Finally winger Sam Samani scored the 9th try of the games for a great overall performance by the Patrican Brothers Fairfield team.

All you need to know for SEQ junior girls grand final