Dare To Dream- But When You Do, Dream Big!

The beauty of sport is that if everyone in the team buys into a dream, works hard, has a great attitude and never gives up on that dream … special things can happen, and we did it.

Heathcote High School won the Comprehensive Schools University Shield Rugby League competition. This is the oldest school competition in Australia, and has been running since 1922.

Over 450 schools participated in the competition in 2019 and we are number ONE! Heathcote High rose to defeat Bass High, the much bigger and more fancied opponent.

I use a quote from Vince Lombardi: “The difference between a successful person and others is not a lack of strength, not a lack of knowledge, but rather a lack of will.”

The dream started in November 2018. The players committed to the goal of winning the University Shield in 2019. We trained at least once a week in the morning at 7:30am and devoted some time at lunch too.

Campbelltown Stadium hosted the Grand Final and it was bathed in sunshine for the battle. Straight from the kickoff, Heathcote High made their point clear with committed carries and enterprising play.

Heathcote quickly took advantage of a gap in Bass High’s defensive line and Kobi Paynter scored in the corner. Blake Barden potted the ball from the sideline to make it 6-0.

Within minutes, the Rams were in again, as Luke Mason masterminded the set move to see Kye Mayne score our second try. Once again Blake Barden’s radar was on and he slotted the ball from the sideline to make it 12-0.

Kye Mayne then repeated his efforts with a determined run and exhibited Fred Astaire fancy footwork to crash over the try line to make it 16-0. Blake Barden added the extras to bring the scoreline to 18-0.

Heathcote turned the screws and put the pressure on Bass. Blake Hosking sliced through the defensive line like a hot knife through butter. This “metre eater” set up the following try with great field positioning.

After a shift in the football, Jacob Masters used his sharp footwork to evade four defenders and slam the ball over the line to make it 22-0. Blake Barden sent the ball sailing over the posts to make the score 24-0.

After a short passage in play, Bass were awarded penalties and saw their own try line. After repelling Heathcote’s advances, the Bass team put on a scrum move to see the score turn to 24-4.

They converted to see the score be 24-6. Heathcote responded quickly and was able to dominate the much bigger team. Heathcote was able to find gaps in Bass High’s defensive structure.

The Ram engine room, led by Logan McKinley, continually peppered the defensive line of Bass. This committed approach left Bass unable to cut Heathcote down, which saw our cheeky number 9, Eli Ferguson, scoot over the line from dummy half. Blake Barden converted to see the half time score end 30-6.

The second half showed Heathcote High’s determined attitude, and a steeled focus saw our Rams continue with the same purpose as the first half, which led to an early second half try to Blake Hosking who toyed with the Bass defensive line to have the score race out to 34-6.

Blake Barden added the extra and the score was 36-6. Heathcote fell into the trap of allowing some easy penalties against them.

Three in a row presented Bass with great field position again. After firing several shots at the Heathcote defensive line, Bass scored and converted to see the score move to 36-12.

However, a year built on work ethic and knowing your role within the team saw Heathcote wrestle back the momentum.

Jacob Masters danced his way over the line again, evading several defenders, but they were far too slow for our 5/8 who scored his second try to make it 40-12.

Blake Barden added the extras again to make it 42-6. Heathcote then put the foot down and pressured the Bass defensive line again.

Blake Hosking with his Man of the Match Trophy in the Uni Shield Grand Final (Photo : steve montgomery / OurFootyTeam.com) The determined effort saw Blake Hosking easily make it over the line for his second try to make it 46-12. Blake Barden added the two to see the score soar to 48-12.

Not being tempted to put the cue in the rack, the Rams kept pressing forward which saw Kobi Paynter bust through the defensive line to make a 65 metre gain.

On the back of a great field position, Ryan Barden dribbled a cheeky kick into the in goal to his big brother which saw the “point machine” score his first try of the day.

Blake, who was eight from eight, missed the opportunity to convert his own try to see the score extend to 52-6. Heathcote pressed on, aiming to make as much as they could of their lead.

The crafty halves worked together late in the second half to see a quick shift to the right side, and fancy passing saw the baby of the team, Jake Quinlivan, score in the corner to make the score 56-12.

Blake Barden missed the kick so the score remained 56-12. 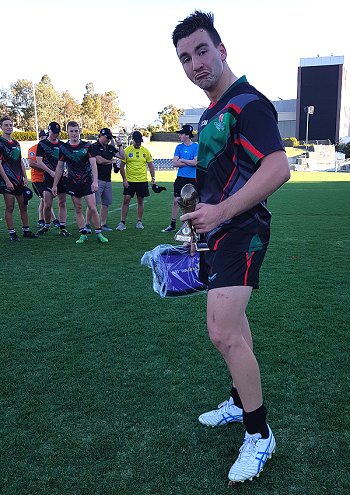 ratulations to Blake Barden who had a personal points tally of 20 points and to all the Ram players – you were amazing.

However one player stood out in the pack and that was Blake Hosking. (on right)

They were quick learners, dedicated, and a credit to their families and the school.

The year of 2020 promises so much with only four players not returning. It will be back to the drawing board in November when the training for the 2020 University Shield campaign begins.