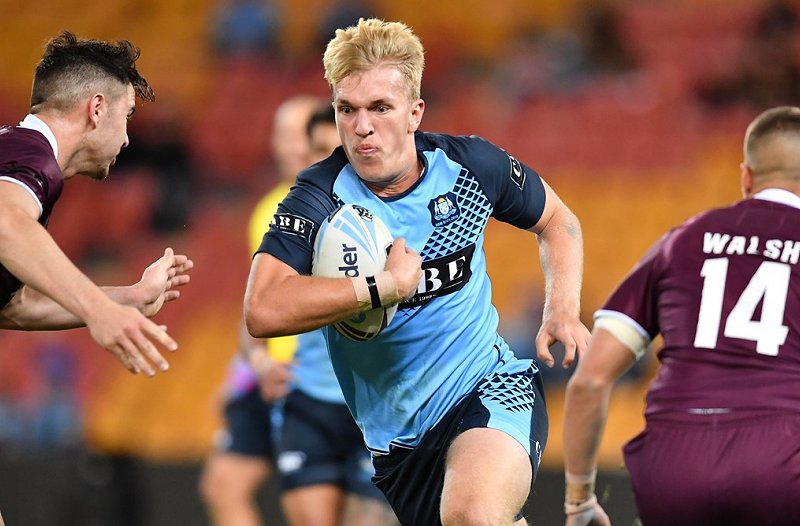 The 2019 NSW Under 18s side features just 92 games of NRL experience with a key core of players from both the Illawarra Steelers and Manly Warringah Sea Eagles.

These two sides would eventually battle it out in the SG Ball Cup Grand Final, with the Sea Eagles coming away with the spoils.

Led by coach Michael Ennis, the Young Blues played the curtain raiser for Game One of the 2019 State of Origin series at Suncorp Stadium.

They put in a gallant performance, but came up short against a Queensland side featuring Xavier Coates, Sam Walker, Hamiso Tabuai-Fidow and Reece Walsh.

Two years on, nswrl.com.au looks at some of the players who have started to turn heads with their performances in the NRL. A junior representative star, Schuster rose through the ranks at Manly as a silky five-eighth and eventually found his way into the backrow.

Despite leading the Sea Eagles to the SG Ball Grand Final wearing the six jersey, Ennis opted to select Schuster in the backrow due to his skills and ability to carry the ball into contact.

Schuster made his NRL debut in 2020 although he established himself as one of the best young players in the NRL after a stellar year in 2021, earning himself a Dally M Rookie of the Year nomination in the process. The crafty halfback showed he loves the big moments and his performance would earn him Man of the Match honours.

Since then, Sullivan has played six NRL games for St George Illawarra Dragons with his best performance coming in round 24 against the Cowboys at hooker.

Sullivan finished the match with one try, one try assist, two linebreaks, three tackle busts, one forced drop out, 61 running metres and 32 tackles.

Sullivan will likely be competing with Amone for a spot in the halves alongside Ben Hunt in 2022.

After making his debut for Parramatta Eels in round 12 against South Sydney Rabbitohs, Will Penisini has proven he is one to watch for the future.

A big body for such a young player, Penisini possesses size, speed, footwork and was more than up to the challenge of defending on an edge in the NRL.

Penisini’s career best performance came in round 26 against the Knights where he finished with one try, one try assist, one linebreak, four tackle busts and 151 running metres.